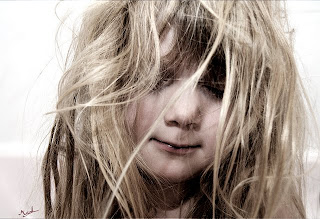 I heard on the radio this morning that the average woman spends 40 minutes every day doing her hair. Over a lifetime, that's two years of combing, blow drying, gelling, curling and ratting -- usually with the goal to look effortless.

I'd like to think I am helping lower that number. For the first 10 years of my life, I refused to comb my hair.

I was born trapped under a heavy mountain of what feels like horsehair. A mutation of self-growing wire. And my thick mane wasn't satisfied with just boiling my scalp to 159 degrees on a hot summer day. It is coarse and curly, so it also tangles easily.

I wasn't the only person who hated wrestling my head mutant. After eight years of violent combing (thereby removing all sensory capability from my follicles), my mom -- who has whisper-thin, straight locks -- resigned. She threatened: I didn't start combing my own hair at least once a week, she would just cut the "rat's nests" out.

I spent several years of my childhood with an upside-down mullet: short on the underside, long on the top. This was a good five years before it became cool for girls to shave the underside of their hair, cut zigzags into the sides and pull it into a ponytail. Ironically, my mom wouldn't let me do that.

My mom and I (God bless her on Mother's Day) have always had a rocky hair relationship. She is a natural brunette who dyes her hair blonde. I'm a natural blonde who dyes my hair brunette. She hates that. Yet she is the

person who got me hooked on hair dye -- at the tender age of 9.

We constantly lament how expensive it is to keep up our hairy addictions, yet neither of us could imagine being ournatural color. Gross. Shudder, shudder.

The economy (oh, the "e" word) doesn't help. In fact, area hair salons report that beauty is one of the areas taking a big hit, as increasingly more people make cuts (zing!) to race away from the red.

Specifically, more people are opting for store-bought color, which promises you'll get the same results as if you went to the salon.

But be careful, says Robert DiTacchio, creative director of Jon Ric International Salon and Day Spa in Denver (www.jonricdenver.com). More often than not, he says, people end up spending eight times what they would have if they'd just asked the pros. Eight. Times.

Boxed color costs between $15 and $30. Color correction services to fix your hair after it turns out leopard-spotty begin at $150. Salons across the area have reported a "drastic increase" in these color mess-ups -- nearly double during the past year.

Unfortunately, this is a number I am contributing to. In March, I had to seek professional intervention from Fringe Hair Studio in Louisville to abolish a fire-truck red spot that I ignited near my bangs. It took three layers of bleach to conquer.

If only I had consulted someone like DiTacchio beforehand. He recommends calling in the pros when you are dealing with resisting gray, vibrant colors (perhaps fire-truck red?) and blonde. Blonde can turn green or orange. Reds can morph into dull pink.

If you do color at home and you're not striving for a jungle pattern, get a friend to do it for you, DiTacchio says. It's hard to see what you're doing on your own head. The best at-home brand is L'Oreal Professional.