The Boulderization of the Third World 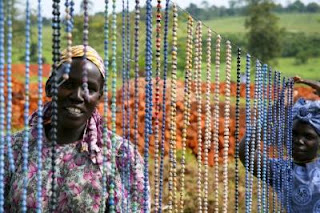 When I was a little girl, I thought the stars were millions of tiny holes poked through the sky to give us a glimpse at heaven behind the curtain.

As I walked through the Kyangwali Refugee Camp in western Uganda last week, I had that feeling again.

Sure, there was this heavy darkness stretched over the continent -- and on a refugee camp, things get really dark. Figuratively and literally. Zero electricity means zero ambient light. In fact, twice my mom woke up in a panic because she thought she had gone blind.

I laughed, as any daughter should.

But with darkness this dark, the brightness is that much brighter -- you guessed it -- figuratively and literally.

One night, I was busy obsessing over the stars to distract myself from the fact that I hadn't washed my hair in two weeks, when one of the stars seemed to wiggle itself out of the constellations and perch on a mango tree. Then, another. (Insert confused dog-like head tilt here.)

As a Colorado native, I didn't know this version of Lite-Bright. Now, my mom got to laugh. Lightning bugs. Aha. And they seemed to be in some sort of arthropodical turf war with the mosquitoes, which is why we were in Africa. My mom's nonprofit organization, Think Humanity (www.thinkhumanity.org), distributes mosquito nets and runs an orphanage at the camp.

But then, in the distance, we saw two more yellow sparks. They were on the ground, and shuffling, not floating. As the bulbs drew closer, more appeared behind them. More. Until it was a veritable mafia of radioactive-yellow -- Crocs.

The Niwot-based shoe company's SolesUnited program has distributed more than 2 million shoes to needy feet worldwide, and this summer it left its footprint in Kyangwali.

For the first (and only) time in my life as a fashion columnist, I praised these ridiculous-looking clown shoes. And I felt envy. Turns out the adorable Sketchers I brought were better suited for Chinese foot binding than traipsing around the equator carrying a 40-pound backpack.

But at least my feet underneath looked lovely. Before I left, I got a pedicure at Ten20 spa in Boulder. Miraculously -- and I say this with no exaggeration -- my polish endured the worst of human conditions. In fact, I was the only person in my group whose feet made it out of Uganda with no jiggers.

Warning: Only read the next sentence if you are not currently eating breakfast. Jiggers are parasitic fleas that burrow into your feet and lay eggs.

Does Ten20 have some magic anti-jigger treatment? Perhaps. They have everything else (including M&Ms and poodle-print aprons). Not to mention in nature, fluorescent coloring indicates poisonous. So maybe my bright pink polish scared the parasites away.

Several days later, I ended up in the capital, Kampala. While limping through the neighborhood where we were staying, I stumbled across a familiar sign: BeadforLife.

I had heard about BeadforLife before. The Boulder-based nonprofit organization empowers impoverished Ugandan women to make colorful jewelry out of recycled paper and trash. In fact, I had purchased my mom a few BeadforLife necklaces for her birthday. In fact, she was wearing them.

I followed the sign down a hill, toward a palm-tree field. Then left, then left again. I felt like a real hard-hitting fashion journalist when I knocked -- unannounced -- on the big metal gate. If this was a slum, or a scam, or a storefront to smuggle delicious Ugandan sugar into the United States, now was the moment of truth.

Tada! The door creaked open. And a large front yard was bustling with African women, rolling beads, stringing them, attaching clasps. It was as colorful and joyful as "Charlie and the Chocolate Factory," except way yummier and with no creepy Oompa Loompas.

I bought enough necklaces to feed the entire country for three years.

And today, back in Boulder, on top of my little black dress, my bright African necklaces are my personal little glimpse (back) into heaven.