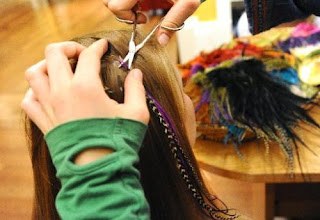 Indisputably, the creepiest thing about me is how much I love to people-watch.

When I lived in the city and not North-side-til-I-die Longmont, my favorite hobby was to walk through the neighborhoods around 6 p.m., right when everyone was shuffling around their homes after work. It was late enough that they turned the lights on, illuminating their windows like miniature stages, but early enough that they still left their curtains open.

My interest wasn't perverse. And it's not like I stalked a certain family, so put away that restraining order.

I just loved imagining things. I would turn to whatever poor friend I suckered to walk with me and exclaim, as if it were the most amazing news since Docs came back in style, "People live there. They relax on that couch. They've probably spilled on that couch, and only they know the memory associated with that stain. What do you think that stain is from?"

Needless to say, it was hard to keep a steady walking partner.

From the outside, I was a creeper and it was just another window to pass. But to someone inside, that window marked a meaningful refuge, his or her own little personal station. I saw a window into another life. Every home was another story. It was like walking through a virtual library, or window-shopping for imaginary characters based on actual home décor.

It's fantastic how much you can imagine about a person based on a glimpse into their living room. Like this guy: middle aged, long gray hair, spends 14 hours a day on a recliner watching TV. His walls are completely empty. His furniture is stacked magazines and plastic kitty litter outhouses.

You can't help it, your imagination is already piecing together this guy's life story, isn't it?

He's my neighbor. Yeah, I've been window-shopping again. I can't help it, though. I'm a gypsy with a mortgage.

My nature is that of Johnny Depp in the movie "Chocolat," yet

Amanda Shank, right, chooses hair feathers with the help of Laura Tietz at Umba on Pearl Street. ( MARTY CAIVANO )
I'm too something (or too little something) to actually follow through with city-hopping. So instead, I constantly rearrange my furniture and change my hair color, and I relocate every day (sometimes even 23 times in one day) in my imagination.

This is why I love working on the Pearl Street Mall, with the best people-watching in the western hemisphere. (I imagine the block outside a Japanese nightclub might be the lone rival.)

That's also why I have a crush on the shop Umba Imports (umbalove.com). This store is a gypsy, in and of itself.

To afford the pricey downtown leases, while keeping its retail prices low, Umba survives on a month-to-month contract and constantly relocates. The 1-year-old artisan co-op has been in the old Art Mart shell and in the basement below Lindsay's Deli on Pearl Street.

A few weeks ago, Umba moved again, into the store next to Lindsay's Deli on the 1100 block of Pearl. The large, bright windows and sleek hardwood floors have begun attracting more "mainstream" faces (yoga moms and hipsters), which has led some of the shop's biggest sales days ever.

The merchandise is the same: fair-trade imports and jewelry, clothes and accessories made by local artists.

Although Umba has hippie roots -- I mean, the owners call themselves "gypsy love pirates," -- the products are elite and cutting edge, but with a gypsy twist, says co-owner Leesah Noble. In fact, I credit Umba for igniting the local trend to weave feathers in your hair. Umba's been doing it for a year (and for a cheap $10 a locket), whereas a surge of hair salons has only recently picked it up.

The next trend, according to Noble? Happy Cow recycled-leather utility belts with pockets ($75) instead of the trusty handbag. No, not fanny packs. OK, they're totally fanny packs.

Since moving into its new location, I've never seen Umba's feather station without a long line, and the belts are already selling off the racks.

Which I'm taking as proof of power of a good window.