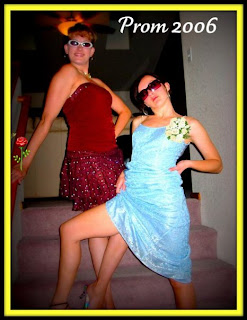 I went to prom for my 27th birthday.

This story might sound familiar if you are one of the three readers who’ve been following my column for the past year or so (hi mom, dad and that sassy middle-age man who e-mails me daily about argyle socks).

That’s because I crashed prom last year, too. In the World of Heckel, once is a joke; twice is a tradition. And I take tradition seriously.

That means I’ll be crashing prom until I’m so old I have to sneak in pretending to be a teacher chaperone instead of a curiously old-school junior who “totally just transferred from the Bay Area, and no, that’s not a wedding band, that’s my great-grandma’s ring that she left when she died, hecka sad, I don’t wanna talk about it. (Sniffle.)”

Obviously, I wore it. Paraded it around the house to the nostalgic bump of “Return of the Mack.” When my husband saw, his eyes widened, and so did his smile. I winced for the bullet. Instead, he pulled me close and proclaimed how stunning I looked.

That meant a lot coming from a man wearing a wrinkly, untucked button-down, gray slacks and muddy flip-flops. Just like the old days. We were ready to roll out.

But not alone. Co-conspirators were my girlfriend Crazy Christine, 28, and her hubby. Christine showed up in a short black three-tiered ruffle dress with so many sparkles she looked like she was on fire. I told her there was no way she’d get in wearing something so hideous. They’d sniff our game out a football field away.

Then came the touchdown: She’d bought that dress at Ross. On Thursday. In 2006. It was a real dress that real people were buying for real occasions.

The dance itself was pretty lame, not half as exciting as the fact that I could still fit into my high-school clothes.

We simply walked through the doors, wearing oversized sunnies, but no corsages (my flip-flop-wearing date was too cheap, the jerk). We got our pictures taken with the cheesy “Secret Garden” backdrop. Did the Macarena when everyone else was grinding to Beyonce. Spotted several other girls sporting Christine’s dress. I felt pretty cool that no one else was wearing my curtain.

When things winded down, we hit the bars. The bartender complimented my dress. I told her she could have it – no, seriously, take it. She politely declined and never returned to my table.
It was the best prom I’ve been to in like eight years.
Posted by Me at 11:02 AM