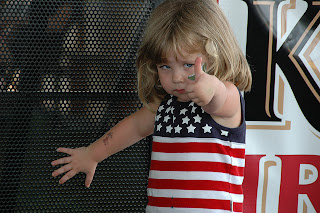 Ahh, how the Polish in-laws do love shopping at Ross.

I call the last two weeks of my life the Polish Invasion. I housed my husband’s parents and, with that, ate more Polska kielbasa than my American digestive track could handle. I won’t elaborate.
The in-laws were absolutely floored by the possibility of buying Calvin Klein jeans for less than $20. They discovered you can swathe yourself in marked-down BCBG, if only you have the determination to dig through the cluttered racks.

They visited the Ross stores in Fort Collins and Boulder at least – I am not kidding – 14 times in their 15 days here. While I was flipping through their vacation photos, there was even a picture of my father-in-law standing in front of the store giving a thumb’s up.

He was wearing the discounted Tommy Hilfiger button-up he’d bought there the previous day.

So deep was their love that, apparently, the sales associates thought my parents-in-law were moving in. During my mother-in-law’s final Ross excursion, she was browsing through the jackets. She came across a black jeans jacket that caught her eye. Then she realized it was her jacket, which she had accidentally left at the store a week earlier. Someone had found it, hung it on the rack and tried to sell it.

My mother-in-law was concerned that her coat must not be very cool if no one wanted to buy it after one week on the racks.

I told her she should be more concerned about those shoes she bought that didn’t have a price tag on them.
Photo by Flickr user capn madd matt.
Posted by Me at 8:56 AM