Fashion karma: Why I hate the bus and the bus hates me 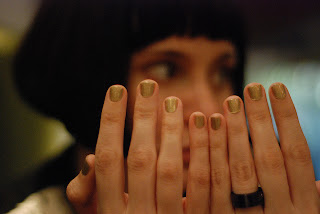 Sometimes, I ride the bus. Although this helps secure me a seat in EcoHeaven, I loathe the bus. It's boring and smelly and cold, and it takes twice as long as driving. I can't read or text because I have severe (like SEVERE in all caps with extra exclamation marks!!) vertigo. I never used to have vertigo. It's a new feature on Aimee 3.1.

Yesterday, I had a brilliant idea on how to pass the 16 hours it takes to go the 14 miles from Boulder to Longmont. As a new mommy, I never have time to paint my nails. (It's OK to already start shaking your head at me as you anticipate where this one is going.)

I figured I could paint my nails while waiting at the bus stop, because I am a complete wreckmaniac about bus schedules and I am always 25 minutes early because I'm so stressed out and terrified of missing the bus, and the whole time I'm at the bus stop I pace around nervously checking the time and looking around for the bus like if I relax or blink I will somehow miss the 40-foot-long, screaming vehicle moving at 2 miles per hour as it churns past me.

I hate the bus.

So I thought, in the peak of my ultimate brilliancy, I thought I could paint my nails while waiting at the bus stop, and then I would have one full hour of staring out the window counting cows for the polish to dry.

How could I go wrong?

Oh, let me tell you.

Turns out yesterday I was so early to the bus stop that I ended up being almost late for the bus earlier than the one I originally planned on taking. I know that doesn't make sense, but get over it. As I walked up, there was already a line forming where the bus driver would soon open the doors, the gateway to nausea and an inexplicable popcorn odor.

I hopped to the back of the line, totally stressed out because I always am when I get near buses with their "schedules." That's when I realized I only had one or two minutes to paint my nails so they could dry on the drive.

I crouched down near by bag and opened up my new bottle of shiny gold polish. When the lid came off, it hit me: the odor. Holy McMoly, I hadn't thought about the offensive smell of nail polish in the enclosed space. But I had already launched this mission, so I was committed.

I stayed crouched down by my bag decided to quickly paint my nails in the secretive wall of my long hair, and then I would slip the polish back into my bag and walk onto the bus and no one would ever know it was me who was responsible for the stink. Perfect plan! And I'd have awesome nails.

One fingernail, two, I got my left hand done. And then the doors cracked open and the line began wiggling forward. Ah! I scooted forward in crouching tiger position, trying to inconspicuously screw the lid back onto the bottle when:

I dropped the entire bottle, and in slow motion, a ribbon of bright gold hell spewed out the top and landed with a violent crash onto my

By now the line was rushing forward, and I had dropped the polish. It had also painted the sidewalk, and the shuffling shoes skidded through it, leaving the striped proof of my error in rays surrounding me. Everyone knew it was me, and as I stood there with my jaw dropped, just staring numbly at the horrible splatter of gold nail polish that had violated my blouse, every passersby getting on the bus scowled at me. (Rightfully so.) Scowl. I scowled at myself. The stench was immeasurable.

Finally, I reached into my bag to get my Eco-Pass -- oops, I smeared three fingers' worth of polish across my white (yes, white, of course it had to be white) bag. I tried to rub it off with my other hand, but then ended up with the pads of my other hand covered in gold lacquer, and the small dots of gold on my bag smudged into what looked like, let's just say, something less than gorgeous that happens when you feed a baby too many yams.

I showed the driver my Eco-Pass and took a seat behind him, afraid to touch anything for fear of soiling the seats and then getting stuck with a $9 million bill to reupholster the whole RTD line. I locked my eyes out the window, knowing if I looked at anything in the bus I would immediately be stricken with the urge to vomit like a pregnant woman on a Tilt-A-Whirl after eating eight funnel cakes, when -- ohhhh. No. Nooo. NO.

The scent of the polish had crawled up my arm and tickled its way into my nose, pulling the nausea plug and sending me head-between-legs sick to my stomach. But I couldn't complain.
This was my fault. I couldn't escape it either; half of my blouse was soaked, my bag was smeared and both of my hands were covered. I even had some near my right eyebrow.

So there I sat for an hour, huffing nail polish; actively striving not to vomit and thereby further offend my fellow passengers; and basking in the karma of yet another fashion disaster.

The bus hates me.


Photo by Flickr user Ollie Crafoord.
Posted by Me at 8:12 AM