The tale of the haunted costume 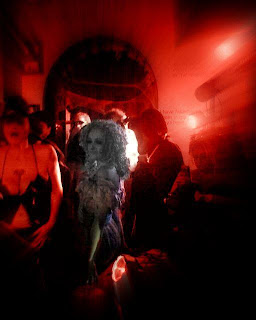 My Halloween dress is haunted.

Before you read this true story, make sure you're cuddled up with your blankey, a cup of soothing tea and your mommy's number on speed-dial.

This tale begins many moons ago. My friend Devon and I were 14 and committing general teenage shenanigans that led us to a cemetery. It was Halloween. Dark and drizzly. Rumors claimed if you stood in a certain spot at midnight, you would see a tombstone burst into flames. We waited.

Then -- crack. The snap of a twig behind us ignited our feet like the gunshot at a horse race. We tore through the graveyard, holding hands and holding our breath. Then -- boom. I tripped, taking Devon down with me.

At first, we were paralyzed by fear. We lay there panting in unison, holding hands and shaking. Until we noticed at the same time where we had fallen: onto two side-by-side graves of twin sisters who had been hit by a train.

Years passed. I was planning my annual Halloween party with a group of friends. Laura found the killer location: a former train station in Loveland, now a bar called the Sports Station. We would make it a ghost town gala, Wild West theme.

I met Devon at the Salvation Army to brainstorm costume ideas. We walked the entire store, blank and uninspired. Then, we turned a corner and saw two old-fashioned pink off-the-shoulder dresses, in our sizes. Hmm. We picked them up and walked further, when we bumped into a table: two floppy straw hats. Next to two blond curly wigs and two matching antique suitcases. And a bundle of rope. All half-off.

"We could be twins," Devon suggested, "Damsels in distress, who were tied to the tracks."

As if the costumes hadn't picked us.

I needed to distress my gown. Make it look old and gory. I poured a pot of coffee over it. Then a bottle of Coke. Then a bottle of wine. I felt sad about wasting wine so I bought another bottle, and after I'd downed a glass, I shared the rest of the cabernet with my dress.

It needed more, so I decided to burn it. Sitting on the couch, I took the lighter to my costume. A few holes in, five fire trucks and about a dozen police cars flew down the street and skidded to a stop in front of my house. Did I accidentally start my house on fire? Did someone smell my dress burning and call 911?

I ran outside, clutching my dress. I was safe. But the house not 10 feet behind mine was in flames.

And I couldn't find the holes I had burned in my dress.

Devon showed up to the party wearing her dress, and it looked brand new.

"It won't stain," she said in annoyance. "I have been pouring fake blood on it for a week, but everything I do absorbs right into the fabric. This dress is indestructible."

I shrugged. Before I could tell her my story, she continued.

"I think these dresses are haunted," she said. "I was trying to burn a hole in mine the other night, and the dogs started barking. I looked outside and -- you'll never believe this -- my neighbor's trash can was on fire. I was afraid they'd think I did it, so I just left my dress as it was."

Then she asked the question I had been suppressing: "Remember the graveyard when we were 14?"

Neither of us needed to elaborate.

After the party, I returned to my hotel to find a police officer in the hallway by my door. He said a neighbor had complained about loud noises in my room, and after three complaints, the hotel had to call the police. I explained that I had been gone all night, and that no one else had a room key. I said he must have the wrong room.

He left, and I entered my room, exhausted. I flipped on the light. Ashes. It looked like black ashes smeared all over the carpet. My room was overturned, all of the pens were broken in half, the towels were in a wet mountain in the bathtub. A woman's pointy boots sat in the corner next to a thick chain. And there was a big red stain on the white duvet cover, dripping onto the carpet.

I tore off my dress, shoved it into the old suit case and locked it.

And left the maid a huge tip.

I have another Halloween party tomorrow. Needless to say, I'm looking for a new costume.

Maybe you're hiding from a haunted dress, or you just haven't got around to finding a costume yet. Regardless, here are a few last-minute costumes that you can pull together with minimal effort, money and fire risk:

Poison ivy. Glue, tape or staple real or fake leaves onto an old dress, or just a scarf. Draw leafy swirls down your arms and across your chest with green and purple body paint.

A carnival game. A friend once won a costume contest with this easy costume. He blew up a bunch of balloons, stapled them to an oversized piece of cardboard and wore the cardboard around his neck. He threw on a mullet wig, mustache and ratty jeans, and sold people darts to throw at him for $1. Extra bonus: Carry a goldfish in a bag to award the winner.

A mummy. Shred a white sheet or two into thin strips and wrap yourself with them. If you have time, splatter the fabric with fake blood or leftover cabernet. Avoid staining it with coffee; trust me, it stinks.

Towelie from "South Park." It can't get much easier than this. Cut a hole in the middle of a large blue beach towel and put it over your head. Paint two white stripes on your forehead and chin, and carry a pipe. Bonus points if you can get red eyes -- legally.

Susan Ross, George Costanza's fiancee from "Seinfeld," who died licking envelopes. Paint your face white, like a zombie, and drip fake blood around your mouth. Wear a long straight blond wig, black slacks, a chunky knit sweater with a button-down underneath or something preppy and carry a box of envelopes.

Someone else at the party or a coworker. One year, the three Amys in the Daily Camera newsroom all dressed like each other. Fortunately, we all had different enough styles to make this dramatic. Unfortunately, that meant I couldn't wear any make-up or comb my hair, and I had to wear a T-shirt and corduroys.

But looking back, that sure beat a $500 carpet and duvet cleaning bill from a haunted dress.