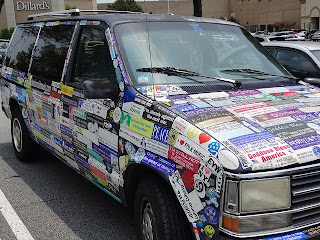 Today, it begins to set in: The results are permanent, but elections themselves are temporary. And so should be that political bumper sticker you put on the back of your $30,000 Audi.

Except bumper stickers are like the bright pink hair dye I put in my hair six months ago: exciting at first, then obnoxious, and then impossible to fully remove, even with scraping and squeegees and soap.

I will never understand the bumper-sticker phenomenon. Especially after my sole bumper-sticker experience in high school had a horrifying consummation. Let's just say my adoration of Gavin Rossdale's then-band, Bush, and the nickname of my car "The Good," proved an awkward word combo that, upon realization, resulted in me having to sell my car for a discounted rate to someone with an excellent sense of humor.

It's just as un-sexy if you stick your car with the losing candidate in a race. Then you look like a sore loser. Or uninformed that the election has, in fact, been over for several years. Outdated bumper stickers are akin to using the phrase "Holla, raise the roof, home slice," while wearing a B.U.M. tee and Umbro shorts. It just hollas lazy, oblivious and stuck in a sad rut. ("What, this shirt is still in OK shape. Why can't I wear it?") The only statement you're making is that you cannot move forward into the current era.

And nothing -- not even the "in" lipstick shade of the month -- goes out of style quicker than an election T-shirt.

On Monday, it hit its trendy peak. High-fives all around, as you flaunt your patriotism, reminding all of your buddies to vote (as if they might otherwise not get the message with 1,600 poli-spam calls and texts per hour for the past month).

But within 24 hours, your "Marilyn Musgrave is my homegirl" shirt plunges from en vogue to bottom of the fashion food chain, regardless of the election results.

Still, a political tee is a less risky First Amendment option than the bumper sticker. Tuck a shirt into a box for a few elections and it becomes vintage and humorous. Especially any Sarah Palin reference: "Remember that beauty pageant lady who ran for VP in 2008 who supposedly shot wolves from a helicopter? What was her name again? Sarah Palin! Dude, I have a Palin T-shirt in my attic."

Or go all Kat Von D and turn it into a punkster shirt-dress, a style taking over the University of Colorado campus these days: Slash off the sleeves, shred the back into accordion-like strips and transform the collar into a halter. Enough mutilation will erase any words, and if a little "McCain" lettering does peer through, people will think you are making some deep and angry proclamation. Top it off with studs and rivets and give it an air-brushed graffiti once-over, and you've transformed cheesecake cheerleader into don't-mess-with-me punkcore.

Or not. Instead, you could channel your energy into something more lasting.

The moms became friends nine years ago in birth class, bonded by a common craftiness. One year, Straka, a graphic designer, sewed several girl's dresses and marked them with ribbon flower pins, designed as a fundraiser to support her daughter's school. At the same time, Runkel made herself a messenger bag for traveling.

They fused their two products, and came up with funky bags with unique purposes, like an album bag ($85), a mommy bag ($100) or an H2O tote for the pool or lake ($85). Today, the bags are sold online at www.ricrac

designs.com, in eight Fresh Produce locations around the country and they're featured in the Boulder History Museum's current exhibit, "Pocketbook Anthropology." Yes, that would be an entire exhibit about handbags, and no, you are not dreaming.

Ric Rac bags look couture, but start as low as $65, and are inspired by some of the oddest fabric choices out there, Straka says. Some bags are made out of silver metallic ironing board cover fabric. Others have retro ball fringe, like you might otherwise find on chenille blankets. Each bag has the signature hand-stitched Ric Rac flower pin.

The bonus: Bags are made in Lyons and Denver. They are colorful and original. And they are so quirky that they rise above trendy, so they can't go out of style.

Hmm, speaking of odd fabric choices, I wonder if Ric Rac can make me a clutch out of an old "Raise the roof, Al Gore" T-shirt.