Lindsey: 'Beware of peroxide' and other horror stories 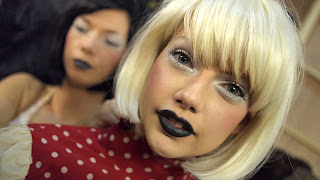 Blond is hotter than brunette. Literally.

My girls and I were at a party when suddenly we smelled something burning. We checked the stove, the fireplace, the microwave.

Then I noticed a flaming wall sconce, its blue wax sprayed across the white wall. Standing obliviously nearby was my sister-in-law, Lindsey. The tip of her ponytail was charred and curling.

Lindsey had dyed her blond hair platinum just a few hours before. I guess that much peroxide is flammable.

Lindsey’s hot-head reinforced my decision to go brunette. I was standing near the candle, too, but my dark hair didn’t catch. (Or maybe I just couldn’t tell.)

When I dyed my naturally blond locks espresso in May, it was supposed to be temporary. Now I can’t imagine going light. Maybe brown is more approachable, or maybe I act friendlier, but people are nicer to Brunette Heckel.

My friend Jess insists societal treatment varies with hair color. She conducted an experiment where she went to the bars wearing different colored wigs to help her decide which hair dye to go with. She said she was repulsed by the meaty treatment she received as a blond. She ended up going red. A different kind of fiery.

Masyn Moyer, the owner of my fave hair salon, Urban Pearl, says the latest hair trends echo the ’60s and ’70s: big hair, soft and romantic, teased bouffants. She said more people are getting perms, too.

I was born with stick-straight hair. In fourth-grade, I got a spiral perm.

A permanent, indeed. It’s like the chemicals mutated my hair follicles. My hair has been spiral-permish ever since. The ’80s live on. My head.

Photo by Flickr user Swamibu.
Posted by Me at 2:28 PM