Brittany: More than a pretty picture 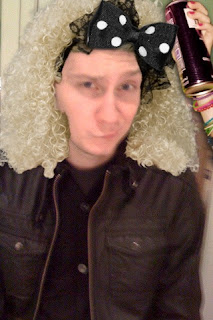 She’d been suckered into some sort of make-over photo shoot with her friends. She thought it’d be fun. Then she caught the mirror and saw JonBenet Ramsey, age 22.

Not even a scouring sponge could de-circus her clown face. Sometimes, nearly one year later, I look at her and think I see traces of the turquoise eyeliner at her lash line.

The photographer immortalized it all on film, and even suggested she send it to her “special someone” for the romantic holiday. Not a chance. You see, Brittany is a natural beauty. She does sport a pink Razr phone, but she also can out-ball any guy. She’s not a spiral curl kinda gal.
A good portrait isn’t as simple as pearls and mascara. It should be a mirror inside the person’s character; the removal of the mask, not caking one on.

Think Glamour Shots of the ’80s. They swathed faces in feather boas, leaned them over a mirror, handed them a red rose or parasol and fuzzed up the lens. All my friends’ Glamour Shots looked the same: nothing like them.

Hello, Napoleon Dynamite. Glamour Shots is still alive and kickin’. There’s a studio in the FlatIrons Crossing Mall in Broomfield, in addition to two Kiddie Kandids (don’t get me started on businesses that intentionally misspell things to sound cutesy; I boycott them on grammatical grounds).

The Broomfield glamour shooters didn’t comment when I inquired, but a search through the company’s online portfolio shows things have at least evolved past the Napoleon Dynamite-style shoot of Uncle Rico (“I could wrap you in some foam, or something billowy?”). The pictures aren’t half-bad, with only a few cowboy hats, sunflowers scattered about and, of course, the traditional red rose clutch.

Still, I’d rather not risk landing in the tabloids under the headline “JonBenet lives – and writes for Boulder’s newspaper.”

I had a great discussion with Erie resident Jen Fellows about “real beauty” this week. The 26-year-old fashion photographer specializes in multi-cultural photos that blend the traditional with modern.

Her most recent photo series features a local woman, part Korean and part Japanese, rocking a traditional kimono on the back of a motorcycle. There’s also a part-Native American woman wearing her ancestor’s necklace and headdress. Instead of war paint, her face is done up Western runway-style (sans turquoise eyeliner).

The photos embody the contradictions that define life. And make it interesting.

“All of my work, I strive for it not to just be a pretty picture, but with some substance,” Fellows says. “When you’re looking into their eyes, there’s something there.”

Fellows says she wants her photos to reflect the spirit of the models and their heritage – and society’s evolving perception of beauty. As cultures and countries blend, it’s about individual charisma, not separate races and ethnicities, she says.

Fellows lives it. She’s part Native American, Russian and Jewish, and is often mistaken for Spanish or Middle-Eastern or Italian, she says.

“Real beauty – what is that?” she says. “To me, it’s what people have inside them and the way they affect the world.”

With a perspective like that, who needs feather boas?

Check out Fellows’ company at www.sanoephotography.com.
Posted by Me at 2:19 PM