Put a legging up 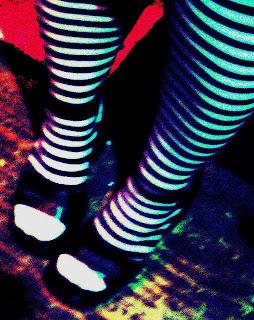 I am demoting myself from this fashion column because I am wearing leggings.

These spandexy snakes re-emerged on the runways as this spring’s new-old look. I swore I wouldn’t do it. There are some ’80s looks that should not return, I said.

I was so serious, I chose to suffer a numb buttocks region rather than touch biking shorts on a 10-day bike trip this summer.

Here’s why: It’s Aimee Heckel, age 9, posing in front of my mirror, sporting an oversized B.U.M. T-shirt, poufed like a mushroom over a wide black belt. Aqua Netted bangs ratted like weeds reaching toward the sun. Keds smothered in puff paint and accented with a rare New Kids On The Block “I love Jordan” button one could only acquire at the concert.

On my bottom, lacy leggings. White. They blended in with my legs so I looked like I was running around with no pants on under my mushroom orb.

Oh, the image still haunts me.

Needless to say, I became ill when I saw the bane of my youth prance down the runways as one of About.com’s top 10 looks from Fashion Week. Style.com called them one of this year’s “must-haves.” Pair them with equestrian-style boots, knee-length shorts or a mini, the fashion gods advised.

Alas. I found solace as I glanced out my office window onto Pearl Street at the timeless parade of Birkenstocks and khaki pants.

Fast forward like two days. I visited my sister-in-law in London. Immediately I was bombarded with leggings dancing along Oxford Street. The runway style was reality.

There I stood in Piccadilly Circus shivering in a long wool coat and nine – yes nine – shirts, when I saw group of British hotties chatting nearby wearing tank tops, heels, leggings and mini skirts.
At first, I scoffed that the icy wind must’ve funneled through those girls’ ears and frozen their common sense.

But the next morn, obviously also a victim of the brain-numbing weather, I went straight to Harrods and bought my own mini. Tried to wear it, but when I stepped outside, all of my leg hair instantly grew back from the cold.

I could’ve just changed into pants. But instead, in the name of fashion, I mustered my strength and took on my childhood demon. I turned myself into a spandex centaur.

Back in Boulder with wide-open eyes, I started to notice leggings everywhere. In Urban Outfitters, in American Apparel on Pearl Street. No doubt, Boulder was not immune.
So here I sit. Aimee Heckel, age 26, sporting a green button-up shirt secured by the same belt I wore oh so long ago. I dug it out of my costume box when I realized wide belts, too, had been given a second chance.

No more Aqua Net or Keds, despite their “hip” new spokeswoman, Mischa Barton of “The O.C.”
On my bottom, leggings. This time they’re black so they won’t blend into my legs. And anyway, I’m wearing a skirt. Not that you can see it.

Photo by Flickr user Dirty Bunny.
Posted by Me at 2:08 PM