Style commandments: Thou shall not dress like thy husband 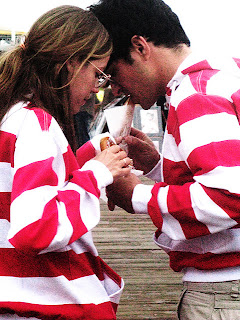 I celebrated the Chinese New Year this week with my bathtub.

I dipped in Lush Fresh Handmade Cosmetics’ “Youki” bath bomb, named after Youki-Hi, one of the three most beautiful women ever, according to Far East tradition.

Now, I’m not a huge bather. I get bored just sitting there, puckering away in the water. Reading is dangerous because the pages get soggy. And staring at the ceiling can only tide my ADHD over for 47.2 seconds.

But the peach Youki bubbles managed to keep me in the tub for about five minutes, a record. The cypress oil smoothed my skin, even though the jasmine scent did remind me a bit of cheap Walgreens perfume.

I felt as silky as Youki-Hi herself when I was done. Except when the water drained and I saw the tub was stained peach – which raised my blood pressure again and sent me to my hands and knees scrubbing the tile. Now I stink of bleach.

Maybe that’s why they call it the Year of the Dog: because you start it on all fours, whining.

We were 20 minutes late to church on Sunday, but for good reason. I had to fend off a catastrophe.

We were walking out the door when I noticed my husband wearing the same outfit as me. My parents bought us both black and gray T-shirts with the church’s inconspicuous logo on them for Christmas.

Granted, I felt sketch wearing the church’s tee to church anyway (sort of like when you’re shopping at Express and realize the exact outfit you’re wearing is hanging on the mannequin). I should’ve known better.

But matching my man? I’d rather go naked and risk being eternally barred from God’s house.
The male-female clothing duo is a deadly sin. And the overall cheese factor is painful. A fashion sacrifice – so Old-Testament-school.

However, matching your boo in terms of color and style is a definitely. Style seems to be getting simpler (think: American Apparel on Pearl Street, which only sells uni-colored duds).
But there are still a lot of dangerous patterns out there which, if paired carelessly with your partner’s opposing wild pattern, could actually explode and alter the chemicals in the atmosphere. It’s true. A Far Eastern myth, I think.

I bought a new pair of Lux jeans at Urban Outfitters. I adore them because
a.) they actually fit (hurrah!); and
b.) the denim doesn’t stretch out on the bum after two wears, creating the “load” (aka adult diaper) phenomenon.

However, the jeans have two colossal, style-intentional holes in the knees. When my mom saw them, she seriously asked me if I had tripped and fallen.

Photo by Flickr user Puma Booma.
Posted by Me at 2:16 PM