The tale of the traveling shoe (and other bedtime fashion stories) 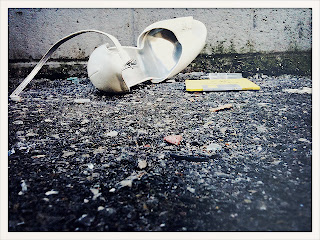 I thought I had packing down to an art.

One carry-on, no need to check in the luggage. I planned my wardrobe on a theme. All cool colors and basic styles, as to allow maximum mixing of clothing and overlapping of accessories and eye shadow tones.

Immediately off the plane in Albuquerque, N.M., and I busted the heel off my black pump on the airport’s faux-brick floor. The thrifty packer that I was, I’d only brought one pair.

This sent the rest of my day veering out of control, a frenzied shopping quest to replace the shoe before my journalism conference the next morning.

Three blocks from my hotel, I discovered Ruby Shoesday boutique (www.rubyshoe.com). Fell deeply in love with an Audley London pink and gray wedge. It then broke my heart with a price tag that rivaled my car payment.

I called my husband, seeking financial support, but instead he laughed, saying wedges look like cars with a drop kit, or pumps with a gob of mud stuck underneath them.

Plus, he reminded me, they didn’t match my wardrobe theme.

I decided to never again attempt to defeat the Universal Law of Travel that dictates the smaller the traveler, the larger the luggage. I’m going full-out body-bag next trip.

New Mexico has a complex culture of style. On one hand, there are the sexy Audleys.
Then there are the bright colors splashed on every painting, piece of jewelry and, yes, item of clothing. In one shop, I found a rainbow beaded denim jacket. As if that wasn’t gaudy enough, they added fringe. It was the most painful thing I’d ever looked at. Until I turned around and was accosted by an embroidered vest to match.

Then there was me. Just minutes after stepping off the airport shuttle (and onto my busted heel, ouch), a woman asked me where I came from.

I was taken aback. “Do I scream tourist?” I wondered. “And is that a good thing (a la beaded vest) or a bad thing (never seen the heels break off a pair of designer wedges)?”

Back to the airport. I understand that airport travelers are exhausted. They’re fueled by the
empty preservatives of airplane food. They’re paranoid and humiliated after having stripped off their shoes, belts, coats and – is that an underwire bra? – at the security checkpoint.

But the airport is still a public space, i.e. not your bedroom. And the last time I checked, pajamas had not leaked into the mainstream as acceptable day-wear.

On the way home, gate B6 welcomed me with slippers, sweatpants and wrinkly T-shirts. As I sat next to a middle-aged woman wearing a doggie-print PJ top and matching cotton bottoms, I began to think that embroidered vest wasn’t so bad after all.

Photo by Flickr user Jason L. Parks.
Posted by Me at 8:01 AM