How the Grinch reclaimed Christmas 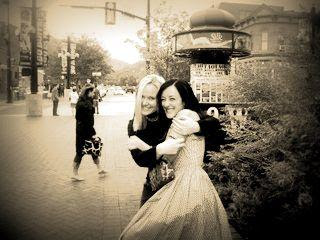 Brittany and the Binch on Pearl Street

Apparently I am the Grinch.

And apparently Christmas started in August, when I spotted my first Santa hat on the shelves at Big Lots.

What I didn't know, however, was that anyone other than the stores and my grandma were already preparing.

It's 7 a.m. I haven't had my coffee. I have three dogs whining to go outside. I'm having one of those mornings where you drop the shampoo bottle eight times, the ninth time on your toe and then bump your head while standing up.

Then, I hear it: Loud enough for the prostitute who sleeps in the park across the street from my house to hear, my boyfriend belts out his own remix of "Deck the Halls," with the dogs' names randomly inserted into the lyrics.

Between verses, I jump in: "Could you please maybe reconsider the volume of your beautiful song?"

Well, that's what I think I say, but it might have come out a little more like, "Shut up or I'll clamp your lips closed with my hair straightener."

But that was last week.

This week, driven largely by guilt, I have launched a full-fledged PR campaign to redefine my image.

Telling an innocent boy to can his blissful carols is pretty low, so obviously my campaign needs to be extensive. That's why every Friday until Christmas, I will share with you a different fashion-related story about giving.

Hopefully, these sappy-happy tales will transform my current Christmas annoyance into a celebration -- or at least reset my karma so Santa doesn't totally blow me off.

Maybe they will make you think about the different types of giving, and remind you to be grateful for your blessings. Even the 6-foot-7, loud-singing, dog-loving, overly-energetic-when-you-wish-you-were-sleeping blessings. Ah, those are the best kinds.

Giving when it's unexpected: The tale of Brittany's broach.

My BFF Brittany is going through a cowgirl phase: plaid jackets, tan boots, dark blue jeans, belt buckles, country music -- everything but the fringe. So far.

While browsing some yee-haw fashion Web site that I refuse to share for fear of spreading her style disease, Brittany noticed something unfamiliar near the collar of a button-down. She sent me the photo and asked what that mysterious object was, and noted that she wanted one, and asked if I knew where she could find one.

Brittany had never seen one because she refuses to enter vintage stores because she doesn't like how they smell. I was happy to have another reason to make fun of her, and we let the broach hunt go.

Until one month later. Brittany was crying, and her e-mail popped into my mind. I charged down the stairs and to Goldmine Vintage on Pearl Street -- incidentally, I wish they bottled the scent of old clothing so I could bathe in it -- where I found rows of antique broaches for $20-$40.

Then I saw a glimmering pink and gold one from the '20s. Stunning. I wanted it. Hmm, I could buy that for myself and another one for Brittany.

Then I remembered my anti-Grinch campaign. I swallowed my greed and realized the pink broach was perfect. As a gift.

When I gave it to her, Brittany cried even more.

Before she bought me a pedicure, massage and a mall pretzel in appreciation. How did this happen? My small gift for her turned into a triple-gift to me.

Bringing me back to Grinch Square One, but at least with pretty toes.