Style that keeps on giving 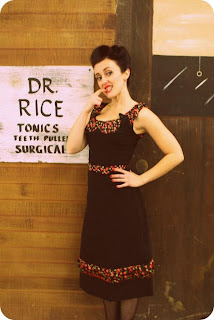 First, there's the tale of Tami and the trendy shirt. I was in seventh grade, at the height at the height of bangs. For the first day of school, my mom bought me the sweetest shirt at the then-sweetest store, 5-7-9. Good ol' mumsy worked in a consignment store, so it was a Huge Deal for me to get a new shirt. It even had tags. I was stoked.

The shirt was a quasi-crop-top button-down that tied in the front. On one side, it was polka-dots. The other was striped. The sleeves were sheer and poufy. The ultimate hotness for the early '90s.

Naturally, my friends were jealous, so it came as no surprise when my best friend, Tami, asked to borrow it.

A month went by. Three. Now we were in eighth grade. Halfway through the next school year, she gave me the shirt back.

By that time, was out of style. It went straight to the consignment store.

A few weeks ago, I was cleaning out the garage, and I found a mysterious blue duffel bag. I dusted it off, looked inside and gasped.

I called Tiffany. She had been my best friend in college. I asked her to meet me at the Irish pub between our houses; I had something crazy to show her.

When I handed her the bag, she didn't recognize it at first. After all, it had been at least five years since our road trip, when I borrowed her duffel bag packed with jeans, a sleeping bag, jacket and several shirts.

Tiffany wasn't sure whether to be annoyed or amused. When she pulled out her old designer jeans, I realized it had been long enough that they had already gone out of style -- and come back into style again.

I insisted it was a blessing in disguise that I'd kept her bag so long; otherwise, she would have sold the jeans and had to buy them back again.

Then she unpacked a shirt. It had sheer sleeves, like the kind that was cool in the early '90s and came back into style in the early 2000s, and then was once again uncool.

Hello, karma. Not to mention a statement on the circle of fashion.

I bought her a few beers as an apology. When she was nice and tipsy, I reached into the duffel and swiped the shirt. I brought it home and decided to send it Tami, who lives in California, where the shirt is already probably cool again. Then, I deducted, by the time I get it back to return to Tiffany, it'll be circa 2012 and it'll be hip in Colorado again.

Call me a fashion genius. Call me a matchmaker.

You can thank me later.