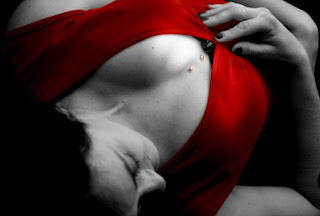 It could just be a coincidence.

There's no hard evidence. But the correlation has local acupuncturists and body piercers intrigued -- and baffled.

Granted, it's only been three months. But if you're a victim of chronic anxiety -- paralyzing panic attacks several times a week, usually for no reason -- three months feels like a new life. Like coming up for breath after 29 years under water.

It was September, and I had an especially rough attack. In a daze, I ended up at K&K Piercing on University Hill in Boulder. I walked in and impulsively asked the workers to pierce my chest with a vertical bar in between my breasts along the middle of my body. This was out of character; I'm not a big fan of piercings, and I didn't know anyone with one. Maybe I thought it would be a good distraction.

It did not hurt. In fact, it felt tingly. Odd.

Several weeks later, I was at my acupuncturist. I told him about my piecing. I asked him if the rod through my chest could affect the flow of my energy, or "chi" in Eastern medicine. If sticking tiny acupuncture needles into your body can transform you, what about a more permanent puncture?

He looked at where I was pierced and smiled.

Acupuncturists place needles there to reduce panic attacks, insomnia and anxiety. The increased blood flow and changed direction of the energy there often eliminates panic attacks, he said. I had never talked to him about my struggles with anxiety.

Which is when I realized I have not had an attack since I got the piercing.

I didn't even know what I was doing when I got the piercing. Could I have subconsciously "fixed" myself? I consulted the experts for an answer.

More than a pretty jewel

Barrie, of Boulder, is an integrative wellness counselor with a background in Ayurveda, an alternative medicine with roots in India.

Piecing the ears and nose is an extension of traditional Indian acupuncture, Barrie says -- "not just for beauty, but to trigger the vital energy points in the system."

Ayurveda tells women to piece their left nostrils with a gold post. That is supposed to ease childbirth and menstrual pain by giving a warming, energetic balance to the cooling right ("lunar") side of the brain, which rules the left side of the body.

Backus is the owner of the Ayurveda-based Alaya Yoga Spa in Louisville, and she does marma point massage. Marma points are similar to acupressure points, although they don't directly overlap in location or size.

Initially, Backus says, "You get a euphoric rush when you get a tattoo or piercing at the physical level, and the mind and emotions are usually in a particular state before you get the work done, then afterward your mind and emotions have shifted."

But, she adds, the energy change is not long-term -- positively or negatively. The energy of marmas will eventually redistribute around the piercing.

Europe's oldest natural human mummy, found frozen in the Alps, sported 57 tattoo marks on his body on the acupuncture points for osteo-arthritis. An X-ray found he had arthritis, suggesting he had been tattooed for medical reasons.

"There's enough history that shows certain types of piercings and tattoos have been used to enhance energy flows," Dann says.

And in Africa, scarification -- a sort of mix between tattoos and piercing -- was believed to open up spiritual and physiological energies, Dann says. For example, scarification on the chest would open up the home of the spirit.

The ears are especially packed with acupuncture points.In fact, acupuncturists consider the ears a "microsystem," with a point for everywhere on the body.

Note that ears look (sort of) like an upside-down fetus, with the lobe representing the head. Some representations of the Buddha depict him with massive earlobes, signifying wisdom. Throughout history, Buddhists have pierced the center of their earlobes to connect with their "third eye," to enhance their inner vision, according to Jeffrey Dann, a Boulder-based acupuncturist and medical anthropologist.

This could have interesting implications for the growing number of Americans stretching their lobes with ear gauges. Based on these beliefs, could the plugs open or stretch the mind?

Others stories say lobe piercing came from pirates or sailors, who thought stimulating that area would improve eyesight and help them see land at far distances.

Then there is the tragus, the bump of cartilage in front of the ear canal -- and the acupuncture point for metabolism. Local piercers report they regularly see people getting their tragus pieced to help with losing weight.

In fact, tragus piecing has turned into a business in and of itself: "ear stapling." It's been big in the South for years, and fans say it's just now taking off in Colorado.

Annette Cutter, of Littleton, runs Ear Stapling of Colorado (www.earstaplingofcolorado.com), the only certified ear-stapling business in the state.

Cutter has been stapling ears for about a year. She uses an "acu-locator," which reads energy levels, to locate the precise trigger point and inserts a surgical steel staple into each tragus. She says the $75 piercing sparks weight loss, appetite reduction, increased energy and better sleep 80 to 90 percent of the time. She says it also makes food taste different.

It worked for her, she claims. Cutter says she lost 20 pounds in 2½ months after her first staple.

Cutter is not an acupuncturist. And she says she doesn't exactly understand why it works. But using acupuncture principles, she says, the changes that people feel are hard to deny.

Unless, of course, you're talking about the placebo effect. That's how Tracy Akers explains the tragus-weight connection.

"If people think it will work, then it will," says Akers, a piercer at Tribal Rites. "Sometimes it does simply because the person believes so."

Josh Wood, also a piercer at Tribal Rites in Boulder, agrees. Wood has piercings, and he gets acupuncture.

"They are two completely separate things," he says. "An acupuncture needle is more like a screw. They don't jab it into you. They gently twist it into the skin, and it releases, well, whatever it does."

He thinks piercings and tattoos are mainly aesthetic.

"We can pierce any part of the body, and when we hit the meridian points, nothing happens. You don't get joy or excitement from the piercing," Wood says.

He adds with a laugh, "I wish you got joy from tattoos."

Take your belly-button ring out. That's the first advice Amy Dickinson offers her patients with fertility problems. The navel intersects with what acupuncturists, like Dickinson, call the "conception vessel," or the middle meridian up the body, which connects with the uterus.

"A belly ring impedes the flow of energy to the conception vessel, and could have an effect on fertility in some people," she says.

Dickinson, of Boulder, is the vice president of the Acupuncture Association of Colorado. And she says she cannot imagine a positive reason to get a piercing.

"The entire body conducts electricity and has an innate wisdom about where the energy should flow," she says.

In traditional Chinese acupuncture, most piercings are frowned upon, according to acupuncturist Dann. Piercings can interrupt the flow of energy, especially along the middle meridian, where the navel is located. A piecing in one of the energy lines can weaken an entire organ or system. Others believe that metal disturbs the energy flow.

This has created a conundrum for Kirsten Hamilton. The local woman has multiple piercings in her nose. She also has chronic sinus infections. Her acupuncturist says her metal is creating the problem. But she says she loves her rings, and does not want to take them out.

"Everyone's energy is different and resonates with different types of metal, images and other types of jewelry," Hamilton says. "Everyone is different. There are only good and bad places on a specific individual."

Molly Plann, of Louisville, says she began having digestive problems after she pierced her nipples. She eventually removed the piercings because she got pregnant. Since then, her problems are gone, but she says she doesn't know whether it was the pregnancy, the piercings or coincidence. Nipples are on the stomach meridian and can relate to digestion -- although some acupuncturists say they would never needle a nipple.

So assuming there's a connection, how can you know whether a piercing might help (such as Indian women and nostril piercings) or hurt (such as stories about fertility and the navel)?

"You can't, really," says acupuncturist Dann. "It could go either way: block or stimulate the point. You don't know."

Take a cleavage piercing, between the breasts. This is a "huge" acupuncture point, he says, "the master point of the upper body, for heart and lungs."

He says he needles this point to help with anxiety, insomnia and panic attacks.

"If someone had a lot of those problems," he says, "it'd sure be interesting to have it pierced and see what it does."