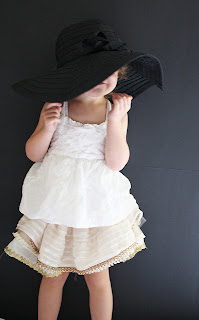 My friends and I were behind dressing room curtains at Rockin’ Robin’s when tiny Adelaide Jane and her mom arrived.

It was Adelaide’s first ever dress-up party – the 2-month-old’s “initiation” into girlhood. Like when the Lion King held Simba over the cliff and the village animals sang “The Circle of Life.”
Except it was my sorority sister’s infant in a pink gingham dress, clutching her first designer purse, with “Love is a Battlefield” on the jukebox. It was so moving, I almost cried.

Back in the ’80s, when I was the muscle-less ball of baby, my mom said she could only get me to stop fussing by dressing me up in different outfits and taking pictures.

So Sunday evening’s dress-up party at Rockin’ Robins Retro and Resale in Niwot (www.rockinrobins.net) was like a pacifier for me.

It’d been a super rough week. First, I dropped my mascara wand on a public floor and had to spend the rest of the day with lopsided lashes. (Note to self: Wake up five minutes earlier so you don’t have to get ready at work.) Then, I wore my fave vintage pumps to a family picnic in the mountains, and my heel broke off. (Note: Don’t wear pumps hiking.)

But, alas, the Fashion Goddess was watching over me. She guided me to Rockin’ Robin’s where, miraculously, I found those same pumps (and for $38 less).

I also found a chunky blue necklace that looks like one Julie Cooper wore on an episode of “The O.C.” Except mine was 45 years old. And cost $12.

I swore I wasn’t going to buy anything. I also knew I would break that promise.

Robin Abb rents out her consignment store for dress-up parties. After my devastating week, I obviously needed one. So I sent out an emergency Evite to my girlfriends. We had full reign over Abb’s jukebox, lighted dance floor and clothing racks.

We’re talking go-go boots, Kimonos, cowboy-print pants, ’80s prom dresses and even something we found called a “silver sparkle tent” with one pocket. I’ve never seen anything like it before, and I doubt I ever will again.

So there we were, behind the dressing room curtains when Adelaide Jane showed up.
From stall No. 1, my friend Jenelle welcomed Adelaide to the Wonderful World of Dress-Up, looking like a silver-coated fortune teller. I left stall No. 3 sporting a tri-ruffle skirt that I think I owned in fifth grade.

Then, out came Tiffany. Sheepishly. She’d been devoured by a skin-tight red pleather dress that would’ve caused the gals on Colfax to blush. Rockin’ Robin had picked it out for her as a joke.
Tiffany asked Adelaide not to hold it against her. First impressions are sometimes misleading, Tiff said – an important lesson for any future fashionista to know.

I think I saw Adelaide smirk.

Either that, or she needed to be burped.

Photo by Flickr user ohsohappytogether.
Posted by Me at 8:39 AM