I need to move 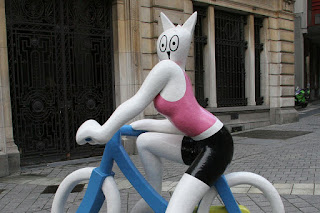 A funny thing happened at mile 60 on my bicycle last week.

I began praising padded spandex shorts while contemplating the benefits of a fanny pack. As the sun swelled, I started to think of how I could really use a visor.

It was as if I had peddled away all fashion sense.

Maybe it was the 104-degree heat. Or a creepy survival mode to distract me from my burning hamstrings.

I was in Napa Valley on a weeklong cycling excursion. In other words, biking by day to negate the caloric toll of enough wine to intoxicate a medium-sized French village.

Just days earlier, I had composed a “negative ode to bike shorts,” swearing I would rather die than purposefully pad my bum. It seemed counterintuitive, after all the hours spent on the Stairstepper, de-padding it.

Then I dropped $80 on a black cycling “skort.” (Apparently I de-padded myself too much. Had to learn how to walk again with a numb gluteal region.)

Granted, the outer skirt concealed the 8-inch thick sponge between my Lycra-suctioned legs. But the experience of willingly purchasing spandex really pushed my fashion boundaries.

I thought I’d come back from Napa with chiseled thighs and a suitcase of fine wine.

Instead, I’m stuck with overpriced spandex and a more lenient eye for style. I don’t know which is scarier.

Photo by Flickr user Tom Olliver.
Posted by Me at 8:42 AM