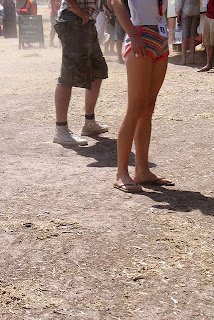 I wore a jean skirt hiking at my dog’s third birthday party. Let me break down that sentence for you.

1.) “Dog birthday party” – Just because he’s covered in fur and feasts on bird poop doesn’t mean he’s not my baby. My toy poodle Quinnen’s party was themed “Take a hike.” That meant Quinnen and his doggie entourage on a Boulder Canyon trail. Quinnen sported a sailor costume. The blue complemented my outfit and his rhinestone collar. He looked extra masculine with his goatee.

You see, Quinnen is red, but the hair on his chin grows in white – obviously begging to be a goatee. He’s been wearing facial hair for about 6 months. Last week, his hairdressers at the Paw Spa in Longmont said they’ve had three other poodles come in requesting goatees. My dog is such a trend-setter.

2.) “Jean skirt during hiking” – I loathe shorts. I don’t own any. None. I work out in boot-cut yoga pants. Much cuter than frumpy, knee-enhancing shorts. (I used to joke that I could smuggle illegal drugs in the fat folds around the knees my mother passed down to me.)

There’s something about the bell shape of every pair of shorts I’ve ever tried on that just makes me feel (and look) nastily masculine. Even in middle school, I got sent to the principal’s office for refusing to wear shorts in PE class. That was during the Umbro craze. I wasn’t above ratted bangs and a spiral perm, but, still, I knew better than to Umbro myself.

Photo by Flickr user Looking Glass.
Posted by Me at 8:46 AM