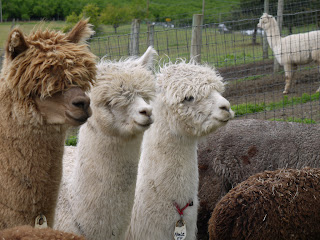 While the rest of the universe watched the Oscars, we watched Oscar the Alpaca.

Instead of a red carpet, we pranced on a dusty arena at the Boulder County Fairgrounds in Longmont. Instead of designer gowns, we flipped through racks of sweaters, hats and spools of yarn made out of the coats of local alpacas.

Granted, I needed to shower when I got home. But glamorous.

Before you punch me in the neck, consider this: The average alpaca's eyelashes are six times fuller than the longest eyelash extensions on a Hollywood star. Alpaca fiber is hypoallergenic and silky, so it won't leave you itchy and bumpy like wool. (More than one-third of Americans surveyed by the International Wool Secretariat said they were allergic to wool.) A fancy male alpaca can sell for upwards of half a million dollars. And alpacas look like huge awesome poodles, according to my daughter while barking at the Alpaca Extravaganza, organized by the Alpaca Breeders Alliance of Northern Colorado.

Although I made up the eyelash statistic purely to start rumors by cut-and-paste-type readers who are too lazy to read a full article, the other junk is true. And although I'm not the type of gal to fester in fairgrounds dirt, I am a fabric whore and an alpaca aficionado.

When I was a young whippersnapper and I had a bad day, I used to drive 30 minutes to the Stargazer Alpaca Farm in Loveland and park near the barn. Like a total creeper, I sat in my car and just listened to the way-too-human humming sounds that these Muppet-lookalike creatures made. Without fail, their singing, paired with their appearance, make me laugh until tears were racing down my cheeks. Even today, a Youtube video called "Alpaca Approach" is saved as my home page. If you can watch this without chuckling, your soul is a rotten banana and you are the devil himself.

Alpacas are the most unintentionally hilarious creatures on Earth, and they're soft and warm and nice and they look like big awesome poodles. No many how many awards, "Black Swan" simply cannot compete.

Here's my favorite way to cover your life in alpaca.

The Alpaca Connection on Pearl Street in Boulder, for high-quality alpaca sweaters, coats and accessories. According to the store, alpaca hair is two and a half times warmer than sheep wool, is water repellent and less likely than cashmere to pill or wrinkle.