Sometimes it's just sexier to be fake 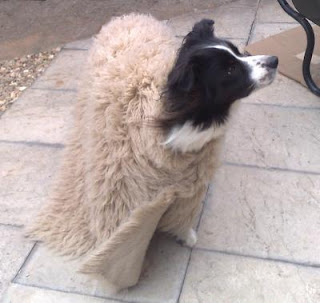 The fire tickled the fresh-cut logs, as the scent of isolation painted the cabin with cozy stillness.

My new husband and I, obnoxiously sappy amid the first 48 hours of our marriage, stepped over the threshold (a word only acknowledged by new brides, never to be used again) of the mountain retreat that was our honeymoon.

Visions of sugarplums, porch swings, bird songs and calling each other "schmoopy" in the shadows of the fireplace danced through my head. No cell service or Internet. Just a stack of books, a teapot, my beloved and... two terrified eyes gaping at me from a decapitated head that had been nailed to the wall.

It wasn't the remnants of a voodoo ceremony or an ancient Roman battle. It was a bobcat. And an elk. And a deer. And a zoo of hunting trophies, paralyzed in their death for decorative purposes.

Now, I'm not committed enough to be an activist or rich enough to be a Boulderite or a vegan. I grew up in the mountains and learned how to brandish a shotgun before I could dress myself.
I've killed a snake with a shovel and eaten elk jerky and even Rocky Mountain oysters.

I just think it's gross to hang them on my body.

Decorating your house with preserved carcasses is like wearing a real fur coat or snakeskin boots. My closet is more sparkly and impractical than a Vegas showgirl's bustier, but it is not deceased. I own a floor-length faux fur black cape, a fake fur hand muff, and I recently acquired an Urban Outfitters coat made entirely out of fake feathers (which, according to the drunk guys who stopped me on New Year's Eve, actually looks like woolly mammoth or perhaps pterodactyl).

My closet boasts more faux leather skirts and corsets than food crumbs stuck in all of the Hell's Angels' beards combined. And I have enough fake snakeskin to clothe a fake python long enough to fake squeeze a fake elephant to fake death -- and subsequently enough of said elephant's imitation ivory jewelry to build a tower for at least half of Boulder to sit in.

My statement isn't political; it's fashionable. We are not cavemen, so we have options to not have to rub against rotting bones, flesh and fur of dead animals. Why don't we crystallize livers and hang them from our earlobes, or concoct an entire dress out of meat slabs? Oh wait, Lady Gaga did.

Let me explain something here.

When I first met my husband, before that one day I used the word "threshold," his mutt of a dog, Stitch, was almost a deal-breaker. Stitch is like Pig-Pen from Charlie Brown, except instead of dust, she constantly walks in a cloud of white dog fluff. If I try to sweep up her hair, before I get to the dustpan, the hair has already regenerated in every corner -- even if Stitch is locked outside. She actually drops tiny hair seed pods, which procreate when they touch oxygen and then multiply exponentially, like Gremlins, or H1N1, or the terrifying trend of jeggings.

More than half of my waking hours are spent trying to escape animal fur; the idea of intentionally swathing my body with it makes me twitch.

I am sure there are more profound reasons to protest fur apparel, just like I'm sure Lady Gaga had some underlying sanity to her bloody steak suit. But for me, I've got enough leverage to stand my ground on the mere evolution out of the Neanderthal and into a species with more options, and better-smelling synthetics. Ones that don't spy on you with shell-shocked, frozen eyeballs while you're trying to get your honeymoon on.