Brittany: How we got punked by an 80-year-old 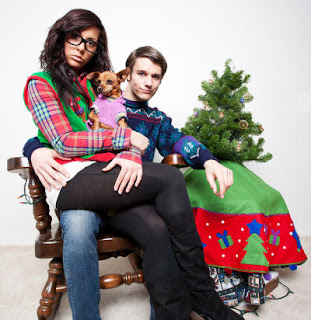 The judgmental smirk from the older woman walking past our table tipped me off. We had Lola all wrong.

My BFF Brittany and I were stuffing lo mein into our mouth-holes at a Chinese restaurant called Golden Heaven Gate Red Dragon Lotus (or some arrangement of those six key words). Coming off a tumultuous week, we'd decided to kick the fun up a notch and sarcastically sport two extra-special Christmas sweaters to our lunch festivities.

Brittany's grandma, Lola, had recently given her the two sweaters, disclaiming that Brittany "might be out and about a bit more and need them."

Thoughtful, yes. The problem? Let's start with the looming sequin tree dominating the front of the boxy, thick red fabric; the star made a precise nipple bull's eye. And the decorative jingle bells. And the silver tinsel. And. And. And.

It felt a little National Lampoonish (where grandma wraps up her live cat as a present). Yet Lola, 80, was distinctly no Griswold. In fact, when she gave Brittany the sweaters, she, herself, was wearing skinny jeans under knee-high boots and a classy white blouse with a subtle holly embroidered on the collar.

Thinking about it, we'd never seen Lola wear anything like the nipple-star sweater. She looked like a movie star, from her still-pristine complexion to her signature necklace -- a cross that rivals 50 Cent, formed out of all of her old wedding bands ("reshaped into love for Jesus"). The exact number of diamonds is unclear, but let's just say any self-respecting rapper would be glittering with envy. I know I was.

Trying to piece this growing mystery together, Brittany and I began tracing back the gifts her grandma had given her over the years.

It started with a calculator with multi-colored gemstones instead of numbers. ("Probably why I'm so bad at math today," Brittany explains.) Then there were the purple bedazzled sunglasses with lenses in the shape of butterflies.

When Brittany received a shapeless mauve winter jacket one year, Brittany noticed her grandma was wearing a fitted, trendy, double-breasted military-style coat. Then two years ago,

Lola gifted two ballcaps, smothered and heaving in multi-colored sequins because "I thought these might be of use to you."

We had laughed it off as just one of those bizarre gifts that grandmas give.

But on this day, at Heaven's Dragon Gate Golden Red Lotus, I looked at what Brittany was wearing -- underneath her sparkling jinglesweater: a royal blue dress from Forever 21, with a modest scattering of sequins on the shoulders.

That's when a woman about Lola's age walked past our table and looked us up and down, in unmasked horror.

Lola had never been spotted in sequins or insect-shaped sunnies. She wore over-the-knee boots three years before they hit the runways, military-style jackets and classy blouses. "These reminded me of something you might like." "I thought these might be of use to you."

Oh, my Golden Girls. Heavens to Betsy. I gasped.

Here we thought we were so hilarious, wearing Lola's ugly Christmas sweaters out to lunch. But this chic grandma was the one really laughing. At her granddaughter's garish style. Her gifts over the years had actually been gags.

And that's how we got punked by an 80-year-old.


Photo by Flickr user Robby Mueller.
Posted by Me at 2:35 PM