Katie: Cowgirl for a day 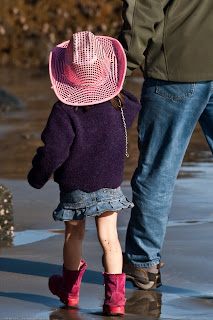 My redhead friend, Katie, walks her own fashion path. And I have reason to believe that path was at least partially forged to spite me.

Our first meeting, an ominous beginning, set a precedent for our friendship and for Katie's future choices, from her talent in math to her love for polar fleece -- both of which strike utter fear in my soul.

Katie was the new girl in third grade, a particularly challenging position in our small, mountain-town elementary school where everyone had known everyone and their moms and horses and ducks since birth (or hatching, as it were). Few new faces ever moved to this part of the world on purpose. We'd all been cast there by crazy cowboy fathers, hippie mamas and general bad luck.

So when Katie walked into the classroom -- all orange hairy and freckled amid many dark-haired Native American peers -- I didn't want to make fun of her. But I guess I just had to. In the same way that the A-dog nips or tries to dominate a new puppy at the dog park, I tried to mark Katie.

"Your shoes are dumb." (They were white with brand-newness and obviously awesome, so I knew this was the most direct route.) "Jem and the Holograms aren't cool anymore." (They obviously were and still are today.)

At this crucial juncture in her youth, Katie had the choice to crumble or kick. She chose the third option: to crimp.

We immediately became best friends, even sharing a boyfriend (Burke silently held my hand during morning recess, and then stood in Katie's general vicinity at lunch). The glory of crimp became the first of many lessons from Katie.

She taught me that you can get tanned, and by tanned, I mean seared like an overdone steak, by slathering your body with vegetable oil and lying out on the scorching tin barn roof. She taught me that it was stupid to cry when she spat crackers in my perfectly Aqua-netted cinnamon roll bangs, even though there was no way I could possibly get the crumbs out without destroying my coif.

In high school, she taught me about personalized license plates ("4-H Queen"), and how empowering it feels to cruise around Loveland in a massive lifted Chevy truck. Katie taught me about tight cowgirl jeans and that you can still feel feminine, even while shoveling horse manure, if you talk about "Dirty Dancing."

Now that we're old and have our own daughters, Katie has taught me that some people ride bikes for fun (not just because they lost their license because of a DUI), and that there is a whole line of shoes with "flat soles" (try to imagine the stiletto part broken off), and that some women consider lululemon an entire clothing group in and of itself, despite its lack of ruffles.

All of these lessons I would have never learned without my redhead. That's because, even to this day, we remain polar (fleece) opposites.

I'd like to think she learned a few things from me, too. But honestly, I think what I left her with was the decision, at age 8, to be nothing like me whatsoever. In other words, the freedom to pursue her own path. In other-other words, the easiest way to stop the A-dog from mounting you is to run the other way. And fast. But make it look like a game.

Photo by Flickr user mikebaird.
Posted by Me at 10:29 AM