Laura: Some things you never outgrow 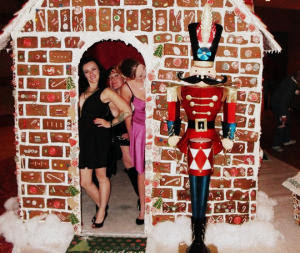 The rent-a-cops at the hotel couldn't prove it, but they kicked Laura out anyway. On New Year's Eve, at 9:30 p.m., they sent her packing to the ice-rink of I-25.

It would have been tragic if we hadn't had 20 years of practice handling, and thereby laughing at, fashion-related adversity.

Laura and I were both straight-A students who grew up to be intelligent, respectable mothers with clean houses, emptied dishwashers and a regular stream of elaborate dinners that make
Martha Stewart look as lame as Colonel Sanders (OK, that last part is jut Laura, but I'm taking credit by association).

Except somehow when it comes to anything fashion related. Then we become terrorists.
Take New Year's. Granted, the security guards had their eyes on us, after they physically removed us from the life-sized gingerbread house for trying to consume the candy corn fireplace (apparently this "stressed out the children").

But don't build a glass elevator running through the middle of a hotel if you don't -- how do I phrase this? -- expect teenage boys to seize the opportunity when a woman wearing a short pink satin dress takes said elevator, and, unthinking, leans against the glass.*

If you ask me, the po-po should have kicked out the horrible teenage boys.

*For written record, this is exactly how the events unfolded, and no other possible way.

Perhaps Laura and I have bad luck. For example, in seventh grade when her mom asked us to paint the living room, how were we supposed to know that she wanted white paint and not bright orange? I thought we were overachieving by including the doors, hinges, light switches, trim and even some of the floor. Who knew her mom would cry?

This incident sent me into a spiral of rebelliousness against walls. At school, every time I went to the ladies room to apply lipstick (three times per passing period), I kissed the wall to dab off excess color. Soon, I had created an elaborate collage of pink smooches across the vast wall of blue tile.

Not even the notes the custodian left deterred me; first, pleas of cessation, explaining how difficult it was to remove dried Mauve Magic. Then, a sign announced that the walls were being washed with toilet water. Pssh. I actually kissed a toilet that day to make a statement about my untouchable insubordination. Looking back, there might have been a less hepatitis-y way to make my point, which I guess was, "I am the master of all walls, and the toilet."

Toilet water could not restrain my lips, but in-house detention eventually did.

A few weeks later, a substitute teacher said she smelled alcohol in my locker. "Yes, of course you do," I confessed cockily, and pulled out the bottle for her to see: Aquanet. Duh. I sprayed it in her face, to give her a good whiff.

I got sent to detention, which was whatever because I was already in detention for stealing an ID card from the library Rolodex (for you youthful whippersnappers who don't know what a "Rolodex" is for, well, neither do I) of the boy I had a crush on. Luke was cool because he had a puffy Buffalo Bills Starter jacket. He wore that jacket in his library picture. I needed it -- to kiss, now that I was banned from using the bathroom at school.

Detention wasn't half-bad, because there I could hang out with Laura. This time she was there due to controversial school pictures. Laura, whose parents were super strict (who wouldn't be after the orange paint incident?), left the house wearing a ribbed turtleneck and overalls. But by the time she got up to the front of the line for class pictures, she was sporting a midriff-baring lace shirt that would only be acceptable on an actual prostitute.

These photos remain immortalized in the yearbook today. Which makes the three days in the detention room totally worth it.

Of course, now that we're all grown up, we have risen above our troubled pasts, or at least we have better excuses.

Like it was the seamstress's fault for not sewing a tighter seam up the back of Laura's pants. Otherwise, they wouldn't have busted when she dropped it like it's hot. Twice.

And David's Bridal should make higher quality dyeable heels. Otherwise, Laura wouldn't get in trouble at a wedding for pounding her shoe against the wall, to try to repair the nail in the heel. Three times.

Luckily, over the years, Laura's mom has forgotten about the offensive paint job. Laura helped divert her mom's attention by meeting her at church, smoking a cigar and wearing a T-shirt that said, "I kissed your girlfriend."

At least it wasn't a lace crop top. See? A lesson learned.