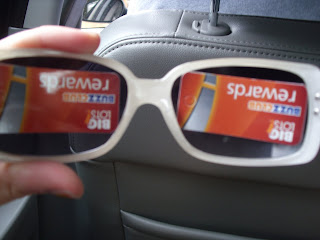 One of the prominent qualities of a true fashionista is the ability -- nay, the instinctual need -- to one-up.

You wear a feather in your hair. I wear an entire ball gown made out of feathers. To Walgreens.

You wear a trendy patch of lace on your sweatshirt. I wear more lace than a Mexican quinceanera: a purple seven-layer(-dip) lace skirt, black lace leggings, a gray lace corset-style blouse and a gray scarf. Too much? Nah, I scaled back and I left the lace wrist-length gloves at home. Ridiculous? Only if you're boring. I prefer fearless and fun.

So needless to say, when my husband achieved the master one-up on me, it sent me into an identity-crisis tizzy.

He put the card in my pants. How? How did he do it? And more importantly, how could I ever beat that?

The challenge began about a month ago in the queue at Big Lots in Longmont. Despite the Hub's intimidating appearance -- he towers above Too Tall Jones like a 7-foot-tall tattooed totem pole -- he, like most huge beasts, is extremely gentle. So much, in fact, that he could not say no to the elderly cashier when she asked him to sign up for a Big Lots Buzz Club Rewards card. Just spend something like $200 a Big Lots and you can redeem your 20-percent-off reward.

I understand a Walmart rewards card because it's impossible to walk out of that war zone without dropping $2,000, even if you just "run in" to "grab some batteries."

But is it even possible to spend $200 at Big Lots? I don't think the entire store of dinged-up junk amasses to 50 bucks. And if we were to somehow blow that much cash at Big Lots, 20 percent off is a totally sucky prize. I mean, isn't the premise of the store that everything is already discounted? So, what, after spending $200 I can get my toilet paper for $1.40 instead of $2 discounted from $5?

Obviously, I had to make fun of my husband, because I am as short as he is tall and everyone knows that short people are generally evil. To rub it in, I sneaked the Big Lots card into his car -- "Just in case you need it, sweetie."

Later that day, I found the card in my wallet. So I put it on his key chain. Without saying a word, he wedged the card into my lipstick.

Oh, hell no. Not the lipstick.

He nearly choked on the card while popping sunflower seeds on our recent road trip. I nearly vomited when I found it at the bottom of my beer. Then it appeared stuck on the inside of my sunglasses, in the leg of his surfing wet suit, under his scrambled eggs, wedged inside my apple pie, in the left cup of my bra.

The card made it inside my book, inside his shoe, under my pillow and in the bag for my white Halloween wig.

I was impressed when he managed to affix it to my bobby pin while shopping in Vegas without me noticing. When he grew suspicious of my actions, I enlisted a friend to slip it in his right shorts pocket while we were dancing on Halloween. I thought the superlative was when I found the stupid card taped to my back; it had been there all day.

But then I found it in my pants.

This brought up all kinds of complicated emotions for me. How oblivious must I be to my surroundings if A) He had managed to accomplish this, and B) I had not noticed for I don't know how long. Not to mention the gross factor. He swore he'd disinfected it, but after the scrambled eggs and wet suit, I felt a little violated, I did.

Which brings us to today. I've been paining over how to get back at that sneaky freak of mine.

With the full acceptance that some things just can't be one-upped -- like, say, Gaga's dress made out of raw meat -- I wouldn't be true to myself if I didn't at least try.

Dear Husband, I hope you enjoy your lunch. I made that pizza just for you. Pick a slice, any slice. I call this game Russian Rewards Roulette.