When style comes as a surprise 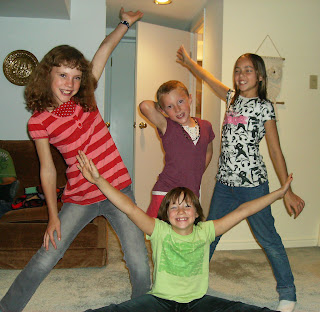 Not us, but basically. Photo by Flickr user bowler1996p.

My unsuspecting parents. It was getting late, so they thought they would just head upstairs and get ready for bed.

Ah, my poor, unsuspecting units. Little did they know what lurked at the top of the stairs, poised and ready to press play at the slightest creak of the staircase.

My mom was about halfway to the landing when the boom box exploded, "You ready, Ron? I'm ready. You ready, Dave? I'm ready."

I heard her slippered feet freeze, not in shock, because my friends and I pulled stunts like this all the time. Her pause was one of resignation. Sigh. Bedtime was still at least one hour and two intermissions away. And she was too polite to ever reject one of my "performances."

Girl, I must warn you.

My Bell Biv Devoe cassette-single streamed poison-y awesomeness across the stage, er, stairs, as Renee popped out from behind the curtains, er, old Smurfs sheet. She was sporting (a verb I learned in my Barbizon modeling course) an oversized Mickey Mouse T-shirt, cinched (thanks, Barbizon) with a cherry-apple (a unique fruit hybrid) belt, to reveal shiny black Spandex shorts.

As with every one of my impromptu fashion shows, today's extravaganza featured a special appearance by Rudi The Wonder Dog, whose poodle tail sagged with embarrassment and annoyance, only matched by the audience's.

And how convenient: I had placed a fully charged video camera only inches from where my mom's feet stopped. She could capture this glory on tape and re-watch it with her eager daughter 10 to 35 more times in the upcoming week.
Posted by Me at 10:43 AM