Surely, this is what the Buddha meant by aesthetic, right? 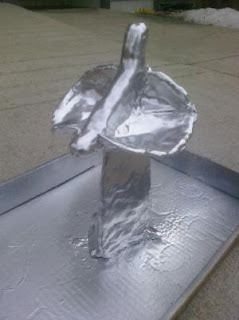 Every day, my life forces me to practice wabi-sabi.


This Japanese concept is essentially the appreciation of flawed beauty. The acknowledgment that nothing lasts, nothing is finished and nothing is perfect -- and that very simplicity is profoundly fascinating and interesting.

Wabi-sabi is the green satin A-line skirt that my friend Laura sewed me for my 30th birthday.
It is the slightly scuffed-up pink pearl necklace I discovered at an estate sale. It is the wrinkles framing my eyes, the dirt on a freshly plucked carrot, the dried sweet potatoes on my daughter's left temple after a particularly enthusiastic dinner and the yellowing pages that break out of old books.

Wabi-sabi is a reminder that everything is fleeting, and that decay is woven into growth. Wabi-sabi is that which is asymmetrical, imperfect, incomplete and impermanent.

Which, incidentally, is how I would describe my husband's latest "creation."

My first encounter with this object was in the kitchen. For some reason, it was drying on the stovetop: a shiny silver 1-foot-tall statue of a flying hotdog on a triangular podium.
So many thoughts raced through my mind.

My emotions oscillated between confusion and delight, and then intense hope, that this special piece would not be our new roommate. For like a flying hotdog it did not look, but rather like a metallic banana in a thin bowl, or a fat snake inside a large contact lens, or fill in the blank with awkwardly phallic entities of corresponding shapes; please don't make me say it.

I was relieved when my husband explained that this statue would soon be awarded to his friend Jeff, who won the fantasy football recital show contest try-outs, or something involving sportive activities and thereby completely confusing to me. Turns out, the fake football troupe was called the Flying Hotdog Circus, and the statue was intended to be a spoof of the Lombardi Trophy. I didn't get the joke. But I did get that the manicotti tube in a clamshell would be leaving my house, so I smiled.

The next day, my husband had moved the trophy to the top of the refrigerator so the final layer of spray-paint could dry. The day after that, the trophy sat on the sidewalk in front of our house; another layer, for good luck.

A few days later, my husband came running in the house, moaning, "Oh no, oh no" like a little kid, juggling about 50 silver chunks. While adding yet another layer of paint, a corner of the base had crumbled off and the statue had toppled out of his hands onto the cement.

We would obviously have to super-glue it all back together, he explained. Obviously.

It took four tubes of epoxy, which my dad says can hold train cars together, but apparently not a clay hotdog wing. Five tubes. Two more layers of paint, now as structural support instead of aesthetic. By now, the trophy was missing many major components, the wings looked veiny with fault lines and the once-triangular base now resembled a tower of rubble.

I came home yesterday, and this time the statue was drying in the middle of the kitchen table. I went to move it so I could get ready for dinner.

That is when it came to my attention that my husband had accidentally super-glued the flying hotdog trophy to our kitchen table.

So many thoughts raced through my mind. Oh, so many.

Wabi-sabi. Wabi-sabi. I repeated the words like a mantra, reminding myself to enjoy the flawed beauty that was now our dining centerpiece.

But unfortunately, in this instance, God help me and have mercy on my soul, not impermanent.