Reba's apartment is a museum of the world's most amusing flea market items. It's a gallery of conversation pieces. It is, in and of itself, a work of art.

Public speaker Patricia Fripp once said style is being yourself, but on purpose. My childhood friend Reba's home is like diving inside her beautifully mad brain and backstroking across her dreams. It's the most alive building I've ever walked through, a character. And a dangerous inspiration.

Reba's living room boasts not one, but two, sets of mannequin legs. One rests upside down between the green nightstand, barely wide enough to support her television, and Charlie McCarthy, the ventriloquist doll, who I simultaneously want to hug and set on fire.

Full-scale skeletons dance on Reba's walls year-round, along with a sad clown portrait made out of yarn, various robots, a picture of a dog in a tuxedo and an oversized landscape of a German castle. She uses old doors for picture frames and a newspaper rack for dishes.

She adorned her kitchen table -- and four mismatched chairs -- with decoupaged coffee bags, and she let her 6-year-old son, River, decorate the bottom of the table. He chose hundreds of googley eyeballs. When new people visit, Reba excitedly ushers them under the table to lie and gaze at her son's creation.

Spend 10 minutes in this apartment and you'll feel like you've known Reba for 20 years. It's the opposite of a beige Pottery Barn showroom house that could be anyone's. Reba's house couldn't
be anyone else's. That's what makes it so glorious.

I visited her in Oregon last week, and returned home to an office that had relocated from a 120-year-old station on the Pearl Street Mall to a modern business park in east Boulder. At the new desk, first I noticed the cleanliness (more than a century of newsprint, yellowed papers and journalist tears really crusts up a place). Then, I jumped out of my chair. This order was uncomfortable. My desk needed flair. And a little crust. Just enough for character.

My first reaction was to hit up one of the Pearl Street shops that I've grown addicted to over the past 10 years (gross, I'm old) at the Daily Camera. Urban Outfitters. Goldmine Vintage. But that was no longer my 'hood. I wept three tears.

I needed to trailblaze east Boulder, like Christopher Columbus blazed the Atlantic, or like Russell Brand explored every woman east of Wales.

My sense of adventure and lack of finances led me to the Salvation Army on 33rd Street. After I ran across a cookbook so ancient that it was growing a new variation of mushrooms, I knew I was home.

My house, albeit lacking eyeballs on the underside of the table, has its own energy. Obnoxiously bright walls, furniture from the 1950s and '60s and even pictures of a glittery unicorn and a hologram wolf (both gifts) (amazing). I'll never claim my house is immaculate, and I'll never pretend I'm rich. But I am proud of my odd little nest that reads about me like my own palm.

At the Salvation Army, I found records for 49 cents each. Frames for $1.30. Books for 49 cents. I almost bought three dozen Chinese literature books (for the colorful pictures of birds and mustached men), but instead, I opted for two Whitman classical books, printed in 1955. Ever blasphemous, I ripped out my favorite sketches from "Five Little Peppers" -- of a girl crying, burglars breaking into a house and a gaggle of kids writing a letter -- and I framed them.

Nearby on my desk, I hung three record covers that make me laugh, including "Sing Along with the Honkey-Tonks," and I bought an old milk pitcher to hold my pens. I found a wooden jewelry box to organize my office supplies (paper clips, sticky notes and lipsticks). I used the records to divide up my desk. The grand revamp: $8.45.

As I complete my first article in the Camera's new quarters, I feel a little greedy, like I get the best of both worlds: a modern office without asbestos flaking into my tea, and a little old-fashioned weirdness, to remind me of where we came from.

I even decorated the underside of my desk, in honor of River. Feel free to peek under there. The carpet's clean of journalist sludge. 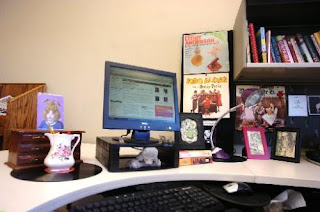 At least for now.