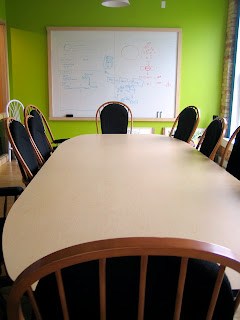 I knew nothing when I went for my first interview at the Daily Camera three years ago, and climbed up the metal stairs – the pathway to All Things Boulder.

I had never slept in a tent, intentionally sweat or gone more than 24 hours without showering.
I had never smelled patchouli. I thought dreadlocks were an urban myth created to frighten young girls into combing their hair.

I had never laid eyes on Iron Men or adventure racers. And here, every Boulder body was perfectly toned and rippling underneath sweat-wick-away shirts and Spandex. Even the faces in the newsroom looked like they’d stepped off an infomercial for the Chuck Norris home gym.

I’d heard from a friend of a friend – someone who’d once journeyed beyond our impossibly average Fort Collins city limits – that such an alternate universe existed under the pointy nose of the Flatirons. I’d heard it called the “Boulder Bubble,” and I was about to learn why.

Until now, my reality had revolved around designer clothes and mascara. I never wore sweat pants – not even to bed – and I reserved jeans only to tone down overly embellished Guess corsets.

The newsroom was dim and yellowy, accented by pillars of fading newspapers and old school-board agendas.

Interesting, I thought, but I meant it in the same way the Pearl Street contortionist is interesting: eye-catching and talented, but honestly, a little gross.

And intimidating. A chiseled body rolled past me, pushing a bicycle with tires still warm from the pavement. An editor was hammering on his keyboard, but hadn’t had the time to change out of his sweat-drenched Nike shirt. A reporter wearing a Prana yoga outfit conducted an interview while balancing on a blue fit ball, like she was floating.

I recognized columnist Clay Evans. He wore running shorts but no shoes – not phased by the 1,000 years of grime coating the old building’s floors. I wondered if he had run the nearby trails barefoot, too, and concluded he likely had.

I looked down at my freshly pressed designer pantsuit and pointy Jimmy Choos and wondered why I’d even bothered.

I’d heard about health reporter Lisa Marshall. I’d seen her mug in the paper, too.

I’d been hired – either for entertainment value or to fulfill some sort of refined-sugar-eating, non-athlete quota – and several years later moved into the features department. Marshall’s territory.

One day, she stopped by my desk wearing tiny running shorts and a sleeveless top.

“Ai-mee,” she said, eyeing the bag of M&Ms and Diet Coke that represented my breakfast, lunch and dinner. “I’m heading up to Mount Sanitas. What’s your favorite trail up there?”

Blank. Completely and totally blank. Mount what? I stammered for a moment, before answering, “Uh, well, I like the long trail. You know, the hardest one.”

She stared at me and shifted between her perfectly chiseled legs. Then a nod and a smile. Apparently that was the right answer. Maybe I had a chance in this city, after all.
Inspired, I decided to get in a little exercise.

I needed another Diet Coke, and it was a good five-minute trek to the vending machine.

I straightened my black-and-white striped strapless top and set out on my matching stilettos, which I justified buying from an overpriced boutique in the Dominican Republic because their brand was “Aimee’s.”

As I turned the corner, I felt eyes on my outfit. It was Sue Deans, the Camera’s editor, known for her intense blue gaze and blond hair. I’d recently dyed my blond locks dark brown. Hair dye – in Boulder! So unnatural. What was I thinking?

Deans also was known for the rare ability to balance femininity, professionalism and Boulder-worthy healthiness. She wore a long-sleeved black cardigan that made my fully exposed shoulders feel wanton.

She was smiling. I thought I felt a wave of acceptance.

But then, “Have you seen ‘The Devil Wears Prada?’ Meryl Streep is great, and her outfits are just fabulous in that movie. Very classy.”

That’s when I realized she probably meant I looked “trendy” in a childish, Forever 21 kind of way.

The natural-blond beauty continued talking over her (clothed) shoulder as she walked away.

“Well, you should really see it,” she said. “And Ai-mee, could you get me a Pellegrino while you’re in the break room? That’s all.”

Photo by Flickr user TheImageGroup.
Posted by Me at 10:23 AM