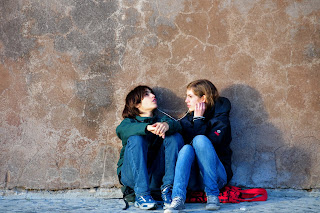 I borrowed them this weekend, which means I claim stake on them for at least another two weeks. It’s OK. Lisa has my white fur jacket, so we’re even.

And anyway, Molly has my jeans.

It’s amusing to watch the circulation of clothing among siblings and close friends — as long as those friends are not only children. Only children, raised without the constant threat of others in their closet, don’t understand the fluidity of possessions.

My mom had an at-home daycare, so I never owned anything. Clothes were constantly ebbing and flowing out of and into my closet; a wardrobe wave. So it’s a bit ill-fitting that two of my best friends today are only children.

I liked Brittany’s necklace, so I put it on. I would have probably worn it five times and returned it, naturally shedding five or six other accessories all over her apartment in the meantime. But when she saw me wearing her necklace, she tilted her ear to one side, like a dog trying to decipher a conversation but only recognizing one word. She knew I was not being deceptive or mean, but why was I jacking her stuff?

Loss is freedom. That’s what I tried to explain to her. And friend-borrowing is implied consensus; no contract or prenup necessary. In other words, as her best friend, her stuff is my stuff is her stuff. By letting go of what we have, we both end up with double. This extends beyond necklaces and into life in general.

Regardless of whether it comes back in one piece, the eventual return is what distinguishes borrowing from stealing, and anyway, it is impossible for friends or sisters to steal from each other due to the Law of Circulatory Clothing, which states, “Let she whose closet is without borrowed objects cast the first stone.”

My entire trunk is packed with O.P.P. (other people’s possessions) — some they forgot, some I borrowed. The exact means of acquisition is irrelevant. Instead, we live by klothing karma: For every dress I lend or lose, I will eventually acquire another. I consider my trunk an extended, mobile closet. I occasionally use the stuff — jackets, skirts, aprons, wigs, a blender (yes, Vanessa, I still have your blender) — but keep it on hand in case I run into that friend and either of us remembers that I have the item.

But be careful with your boundaries. Friendship or blood borrowing is not the same as neighbor or coworker borrowing.

While growing up, I had a neighbor who was a habitual borrower, driven by envy but trapped by cheapness. Whenever my family got something new — a car, trash can, lawn mower, garden spade or fishing pole — the dude asked if he could borrow it.

In this case, he should have just bought his own tent poles. His addiction to borrowing drove a wedge (or spade) through what sliver of fellowship he ever had with my dad. Taken to the extreme, you could probably borrow everything for life, never making purchases if you did it right.

Hmm, isn’t that the same concept of our credit-hungry society?

Photo by Flickr user Ed Yourdon.
Posted by Me at 9:06 AM