Some beauty comes naturally. Some is forced. 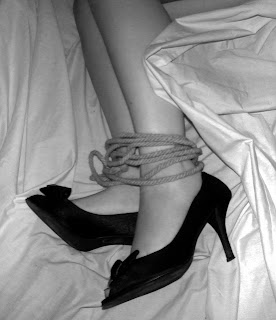 This is one of those stories it will be hard to explain to the grandchitterlings, as well as Saint Peter at the golden gates of heaven.

I believe that all humans are innately good, including me and my little brother on the night that we duct-taped our babysitter to the kitchen chair.

We just wanted to do her hair and make-up. And the girl needed it.

She was our neighbor in a mountain dust-hole of, oh, a dozen houses. Our nearest "big city" was Masonville, whose current population -- about 700 people -- has more than quadrupled since I was a kidnapping kid. And little miss Babysitter's Club didn't even have electricity. In the '80s.

Luckily/unluckily for her, we did.

She thought we were playing a game, until the third roll of duct tape and the realization that she couldn't, in fact, get out of the chair. It was easier to reach her bangs after she rocked the chair onto the floor. We broke her throne and cut her hair, and from her lips we drew a "I'm gonna tell your mom!"

As a talented and, ahem, highly motivated 7-year-old, assisted by my 4-year-old brother, we transformed Laura Ingalls Wilder to Cyndi Awesome Lauper.

Needless to say, the babysitter swore she'd never return, and my parents had to leave her a major tip. That is, after my mom casually remarked, "Your hair looks great. The elephant ears were a risky but good choice," followed by, "Only duct-tape, eh? You got off easy."