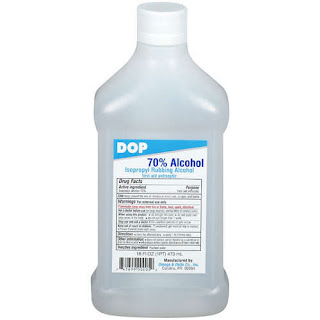 That's my excuse as to why I've never been a fan of water. And by "not a fan, " I mean I used to be terrified to splash water on my face because I thought I was going to suffocate.

Maybe my water terror stems from a past life. More likely, from watching Stephen King's "It" at a young age in my friend's basement. Every horror flick -- "Psycho, " "Arachnophobia, " "From Dusk Til Dawn" -- seems to have a creepy shower scene.

So don't blame me that my skin care regime was a little less than spa-worthy until I got into college. In fact, I used to wash my face (but not eyes or I would be blind) with isopropyl alcohol.

You may know of what my father affectionately called IPA for its ability to remove hot glue and disinfect hospital needles. But as an antiseptic, it also kills all kinds of bacteria and fungi, which left my skin all but zit-free, even in puberty.

My father -- who also washes his hair with the same bar of soap he uses for showering, cleaning his hands, the dishes, the car and the counters -- introduced me to IPA. It worked as an almost-viable skin treatment, if you could get over the violent burning sensation, and the way it dried out my flesh to the point that I developed scales.

As I got older, I learned that a murderous clown was not going to crawl out of the drain, and I also learned that there were many other (non-burning) options to skin care.

There are many household objects you can use on your face (and I`m not talking about Drano).

Denver stylist Jenece Amella (www.stylesbyjenece.com) offers these summer skin care tips:
Strawberries -- If you`re sunburned, these are a great bleaching agent for hyperpigmentation and freckles. Throw strawberries in the blender and add some honey to help it stick together. Apply the strawberry mush to your face like a mask. It will sting a little (hey, I`m used to that), but it`ll reduce redness. Be careful if you have sensitive skin.

Tomatoes -- If your sunburn stings, pop open a can of tomatoes and spread them across your face. The acid in the tomatoes alleviates the burn. Amella learned this trick in Costa Rica.
Posted by Me at 2:18 PM