Oh, dad. Could there be something to dad’s funny quirks? 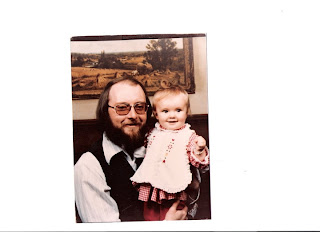 AIMEE: I’ll be gone for Father’s Day this year. Not that we call it Father’s Day in my house. I’ve never called my dad “father” or even “dad.”

To outsiders, it is weird that I call my dad “Frog.”

My family has tried to trace the nickname back, sifting through ancient hieroglyphics (the comic strips he drew during boring piano recitals).

We’ve conducted linguistic dissections (Frog rhymes with smog, and he went to college in Chicago – nope, that`s not it).

We’ve also pondered literary techniques, such as the onomatopoeia. (He has big eyes. Could I have thought he looked like a frog when I was a child?)

But when it comes down to it, I don’t know why my dad is Frog. No one does. It just is and always has been.

And that very inexplicable silliness, oddness and uniqueness makes the name that utterly fitting.
Dads, Frog-like or not, are funny creatures. Especially to their daughters.

VANESSA: And dads are always right. Of course they know who won the game. They just can’t remember the exact score; “Remind me again. Oh right, right.” Or, “This Merlot is excellent. …What’s that? No, I mean if it were a Merlot it would be superb. As a Pinot Noir, it’s so-so.”

BRITTANY: Dads are also experts at everything.

I decided 9 p.m. the night before high-school volleyball tryouts one year that I wanted to be on the team. I barely knew the difference between volleyball and pingpong.

Neither did my dad. Yet I was convinced he was once a professional volleyball player. He confidently set up a spotlight in our back yard and taught me how to bump, serve, block and whatever else they do on volleyball courts.

The next day, my techniques were far different from those of the other girls. I may have even tried to head-butt the ball like they do in soccer and hurl it like a dodgeball. Somehow I made the team.

But it was that day I learned you can convince people to give you a chance if you glow with confidence.

AIMEE: My dad’s signature quirk was his white Illinois sweatshirt, which in and of itself was not problematic. Except the whole “white” thing. Because Frog wasn’t a big fan of the “washing machine.” He was, however, a big fan of wearing that sweatshirt every day when he got home from work for, oh, three years.

After a while, it was a rainbow – no, that sounds too pretty, more like a cesspool – of ink, barbecue sauce, car grease, soil, grass stains and mysterious other forms of man grime.

One night, I stole the shirt from him to wash it. But he intercepted. Another time, I hid it from him. When he recovered it, he paid me back by chuckling as he scribbled across the front of it with a fat black marker.

Frog now only gets dark-colored shirts for Christmas.

And despite, or maybe because of, this tragic experience, I`m now obsessed with clothes so much that I make a living writing a fashion column.

BRITTANY: My dad’s laundering skills are actually amazing. He taught me how to iron, and he’s one of those people who neatly sets out his clothes the night before he wears them.

I think it comes with driving a mini-van. My dad swapped his manly Blazer for a stereotypical mom-mobile when I entered middle school.

As a sixth-grade girl, my clique of friends became like a secret society. We tied up our parents’ phone lines to update one another about every second of our days, which was also chronicled in the dozens of notes we folded like origami and delivered through the slots of lockers.

Never did my dad eavesdrop on our conversations or read the notes that I accidentally let slip into the laundry.

He didn’t need to. He had his van.

Dad shuttled me and my group of gabby girlfriends to and from every basketball practice and game.

Have you ever heard a van full of middle school girls quiet? There we spilled all of our juicy secrets that were too good to write in notes and we revealed our crushes, which changed faster than the Baskin Robbins flavor of the day.

And at the front of the van, my dad was our deejay playing MC Hammer and Paula Abdul cassette tapes at a negotiable volume, loud enough that my friends thought he was cool but soft enough that he could hear if the secret society of sixth-grade girls needed any fatherly advice.

VANESSA: The great thing about my dad is there’s pretty much no disguising his errors. Which is why we laugh a lot. “We, ” meaning my mom and I.

Take our weekend trip to the mountains. Heading up to the hills bright and early one winter day, we decided to swing past McDonald`s for some delicious McMuffins or whatever.

Dad pulls up to the ordering box thing and is like, “Hi. We want three McMuffins, a coffee and two Diet Cokes. Hello? Hello? Excuse me. Is anyone there? What’s the matter with you people? It`s your job to take orders, idiots.”

I was lying in the back and decided it was time to step in and calm the old man down. But as I looked out the window at the object of my dad’s ire, I noticed something peculiar. Right. It was a trash can. He had stopped one tan box too early and was cursing out the paper cups and straws that had been innocently discarded.

When we got to the right speaker, my dad tried make himself look less erroneous by continuing his rant with the woman. But she was sweet as could be, and gave us the egg sandwiches pronto.
Escapades like that are almost daily for the dude in the socks and sandals who adds, “things of that nature” to the end of every sentence. “What’s for dinner? What time are we eating? Things of that nature.”

But that’s why he’s perfect. For me. I love to laugh.

AIMEE: Indeed, dads are funny creatures. But intentionally or not, it’s their quirks – the nasty sweatshirt, the McTrashcan, the mini-van – that made all the difference. Those are the experiences that shaped us into who we are today.
Posted by Me at 8:38 AM