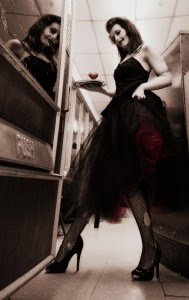 This fashion tale begins with death.

The living dead, to be exact.

I was week four into recovery from an abdominal surgery, and had only recently began walking again. (Read: Hobbling like a rickety swamp creature.) That afternoon, Women’s Magazine stylist Angel Garcia asked me if I had time to pose of a fashion photo shoot for her portfolio.

Obviously I had time. My entire month’s social activities centered around Brian “Bulldog” Moore and Frank Azar. And I had already determined I didn’t want to consolidate my debt into one easy payment, become an automotive repair technician or partake in a class-action lawsuit for the drug Rybotrichomatomatein.

But fashion? Judge Judy would object. In addition to my hunchback posture, I had been wearing the same sweats for so long they were beginning to grow into my flesh. Probably.

With no legitimate way out, I traded daytime TV for a black tutu and (for once) nodded approvingly at my tangled bedhead and the circles under my eyes that rivaled an entire baggage cart. I could not do much, but I could do zombie.

When my boyfriend walked in that night — expecting his little injured fawn curled around a heating pad — he instead found me with more stitches than before, hunched over the table with bloody hands and a fake heart dangling out of my mouth. Without a word, he slowly backed out the door. I found him a while later, locked in his car rocking back and forth humming nursery rhymes.

I had gone too far. Again. It was time to head into the light.

In fashion (and life), we must constantly re-invent ourselves. Sometimes, the change is sparked by boredom, or nature (i.e. the “angel wings” I am growing where I used to have triceps) or, as in this case, the need for balance. And a scared boyfriend.

The depth of my fashion rut became clear when I realized most of my closet qualified as a zombie costume. Perhaps it was a way to free myself of Westwood College’s exquisite commercials, but I became obsessed with finding the perfect white dress.

Not for marriage. For balancing out my dark side.

I have long criticized the white wedding tradition, believing white is a universally unflattering color, not to mention almost universally deceitful. I have a vase of near-black roses in my living room. (Yes, next to the fake heart with a stake through it.)

That’s why I had to seek help from the yang to my yin: My best friend, Brittany. Platinum blonde Brittany who has more white, eyelet and cotton in her closet than a Holister store.
I did a little research first and found out that hip trench coats, oversized necklaces and military jackets actually come in colors other than black. Who knew? And according to Glamour magazine, the little black dress has been replaced by a little-black-on-white-graphic-print dress.
Then Brittany arrived — wearing a black and purple tutu, black leggings, a black tank top, black vest and purple pumps. She looked like Coraline. Or me.

I grabbed up the first white satin dress I saw at Macy’s. It might have been a knee-length wedding gown. I don’t know. Or care. I just needed to reset the balance of the universe.

Plus, adding some light to my life sounded like an appropriate way to begin re-inventing myself. I put on the white dress.

It looked great with my black boots, black pearl necklace, black sash and long black jacket.
I left the fake heart at home.