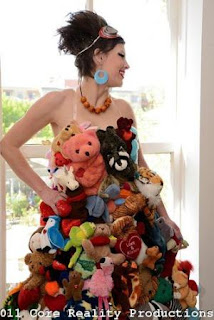 Karen Mandery is the mad scientist of fashion. The Lady Gaga of Boulder County.

Except better. Mandery is like the mysterious creative genius who crafts Lady Gaga`s outfits, thereby transforming her from a forgettable bubble in pop-star soup to a headline-coloring legend.

Mandery is also known (and henceforth be referred to) as Miss Kitty, because the dresses she creates out of mixed media and found (and sometimes stolen from her unwitting husband) objects are so eccentric that they resemble circus costumes.

Hence the Lady Gaga parallel. Although let it be known that Miss Kitty created her dress out of abandoned stuffed animals at the thrift store before she knew that Lady Gaga also had one. (Don`t you hate it when you show up to a party and someone has the same Care Bear gown as you? Hate that.)

"All of the things that we`re taught to be," Miss Kitty says.

She created one dress, called "21st Century Mantra," after she was evacuated from her house during the Four-Mile Fire. She had to quickly decide what handful of objects to take with her. She left with her passport, bikini, dog, bike and computer.

Inspired, she hand-stitched the words "I have everything I need" onto a basic slip. She designed several clear pockets, placing in them objects symbolizing shelter, food, love. She put a TV in there, too.

Around Easter, Miss Kitty walked into Savers and was shocked to see aisles upon aisles of "unwanted, unloved, forsaken" stuffed animals."

So she bought them all up and gave them a second life: in fashion. The dress, called "Love is Who I Am," is designed partially as a statement about loving the unlovable, and making choices from a place of love instead of judgment and reaction.

Miss Kitty originally started designing artistic dresses after her degree in fashion design left her feeling unfulfilled. Another artist suggested she use dresses as canvasses, and Miss Kitty says a light bulb went off in her head.

Soon, she affixed the literal physical manifestation of that light bulb to a dress to hang on the wall. Using her husband`s belt.

Miss Kitty`s glorious gowns will be on display at the Dairy Center for the Arts, along with four other area artists` dress designs, through July 8. The exhibit, called Rough Ruffles.

Which, as Miss Kitty sees it, is "anything goes." And explains why one of her dresses is actually a pair of jeans.

Let`s see Lady Gaga try to pull off something that crazy. Jeans. She wouldn`t last a minute in denim.
Posted by Me at 10:34 AM