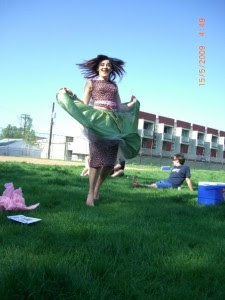 I did not go to prom for my 30th birthday.

By luck, or probably fate, my May birthday coincides with the biggest dress-up day of the year for high schoolers.

So logically — and partially out of protest for no such similar day for “adults” — I have made a tradition of sneaking into various proms and crashing them. Crashing, in this sense, means dancing (I know, who dances at prom?) and not standing around acting self-conscious. I’ve always been a rebel.
We would arrive late and simply walk in, wearing oversized sunglasses and way too much lipstick. Miraculously, we never got caught, kicked out or arrested. Even after the smile lines around my eyes deepened. Even after I unapologetically announced my plans, year after year, in the newspaper. I’d like to think it’s because I’m so youthful and spry. But more likely, no one spoke up because they were scared.

Well, the beer kept me at home, too. (Like one and a half beers; I left my liver in San Francisco.) Which was just as well, because the real party occurred in my closet. According to the photos and not my memory whatsoever, my friends and I changed outfits every three to five minutes.

Then we brought prom home.

It was so melancholy. I pulled out my old prom dresses — all 14 of them, including the four from my uncrashed proms — and dressed my friends in them. Some fit. Some ripped. Some looked more like bathing suits.

Then, we brought the boom box to the busy street outside my house and did a fashion show. It was like everything not to wear all wrapped up on one stage — er, sidewalk. The worst fashion trends, from 1995 to 2008: poufy shoulders, heart-shaped necklines, itchy sequin straps, multi-colored velvet, lace cut-outs. The mistakes seemed to recycle every few years, blurring the decades, illuminating the hilarity of society and most certainly terrifying my neighbors.

Then, the fashion show turned into an impromptu parade. Which, by luck or probably fate, led us to the karaoke bar down the street. Which is where I saw Them.

It was heavenly: formal gowns, PBR, an open microphone, a carnival-style popcorn machine on wheels, more formal gowns — what? More gowns? The entire room was buzzing with women wearing prom dresses. Women, not girls. Old crazy ladies. Just like me.

And, unlike prom, they were dancing. On tables.

It was a bachelorette party, and for the first time probably ever, my friends and I fit right in. A birthday reminder that if you stay true to your own quirkiness, and you don’t chase the past, and you’re willing to keep marching forward (even if it is a ridiculous dress-up parade), you will eventually end up exactly where you’re meant to be.

Which brings us to my e-mail this morning.

I’ll be there. Arriving late, wearing oversized sunnies. Ready to crash.
Posted by Me at 8:45 AM